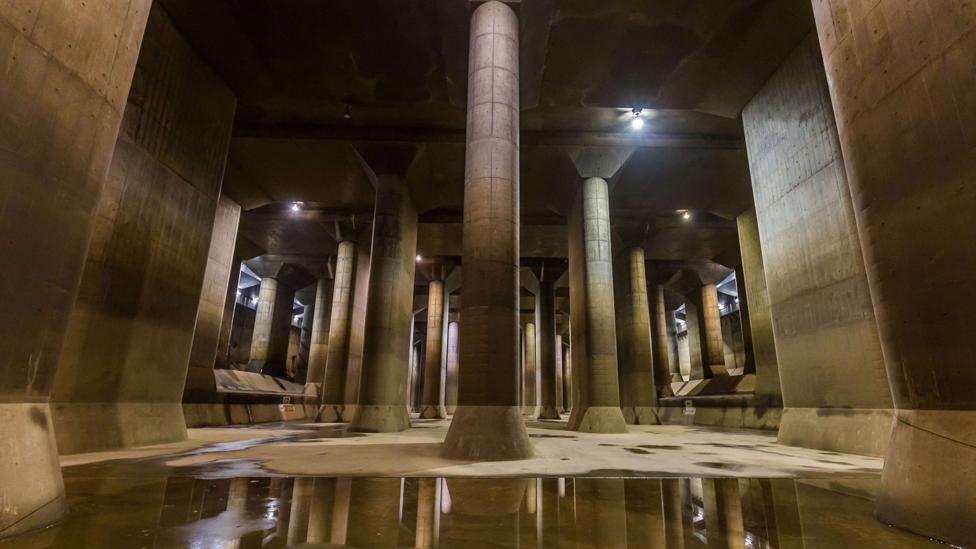 By Diego Arguedas Ortiz 29th November 2018
An intricate system of dams, levees and tunnels defends the Japan’s capital. Will it be able to cope with climate change?

Cecilia Tortajada recalls making her way down a long staircase and into of one of Japan’s engineering marvels, an enormous water tank that crowns Tokyo’s defences against flooding. When she finally reached the tank’s ground, she stood among the dozens of 500-tonne pillars supporting the ceiling. In the cavernous, shrine-like cistern, she felt humbled.

“You find yourself being a tiny part of this humongous system,” recalls Tortajada, a water management expert at Lee Kuan Yew School of Public Policy’s Institute of Water Policy, in Singapore. “You realise how well prepared Tokyo is.”

If Japan is a pilgrimage destination for disaster and risk-management experts like her, this is one of its main temples. The floodwater cathedral hidden 22 meters underground is part of the Metropolitan Area Outer Underground Discharge Channel (MAOUDC), a 6.3 km long system of tunnels and towering cylindrical chambers that protect North Tokyo from flooding.

In the past several decades, the Japanese capital perfected the art of coping with typhonic rains and moody rivers, and its intricate flood defence system is a global wonder. But the future seems uncertain as the climate changes and rain patterns shift.

Tokyo’s battle with flooding stretches back through its history. The city sits on a plain crossed by five rowdy river systems and dozens of individual rivers that naturally swell each season. Intense urbanisation, rapid industrialisation and imprudent water extraction that caused some regions to sink have exacerbated the city’s vulnerability.

View a stunning tour of the floodwater cathedral above

“I don’t know who decided to set-up Tokyo there,” Tortajada, who’s worked in water management for over two decades, says only half-jokingly. ?

Even if Japan has dealt with floods for centuries, Tokyo’s current system truly started to take shape in the post-war years. Typhoon Kathleen hit in 1947, destroying around 31,000 homes and killing 1,100 people; one decade later Typhoon Kanogawa (also known as Ida) devastated the city when around 400mm of rain in a week. Streets, homes and businesses were inundated.

Amidst the chaotic aftermath, the Japanese government stepped up its monetary commitment.

“Even in the 1950s and 1960s, when the Japanese were recovering from the war, the government was investing 6-7百分比 of the national budget on disaster and risk reduction,” explains Miki Inaoka, a disaster expert at the Japan International Cooperation Agency (JICA).

Tokyo’s planners must be wary of serveral different kind of floods. If heavy rain falls upstream, maybe a river breaks it banks and inundates a centric neighbourhood downstream. Perhaps a downpour in the city overpowers that area’s drainage system or a high tide or tsunami could threaten the coastline. What if an earthquake destroys a dam or a levee?

After decades of planning for these scenarios and non-stop construction, the Japanese capital now boasts dozens of dams, reservoirs and levees. Cut into the city’s ground, as you would with a birthday cake, and you will find an underground maze of tunnels alongside the subway lines and gas pipelines that criss-cross the city.

The $2 billion Metropolitan Area Outer Underground Discharge Channel (MAOUDC) and its ‘floodwater cathedral’ is one of the capital’s most impressive engineering feats. Completed in 2006 after 13 years of works, it is the world’s largest diversion floodwater facility and the result of Tokyo’s continuous improvement efforts. ? 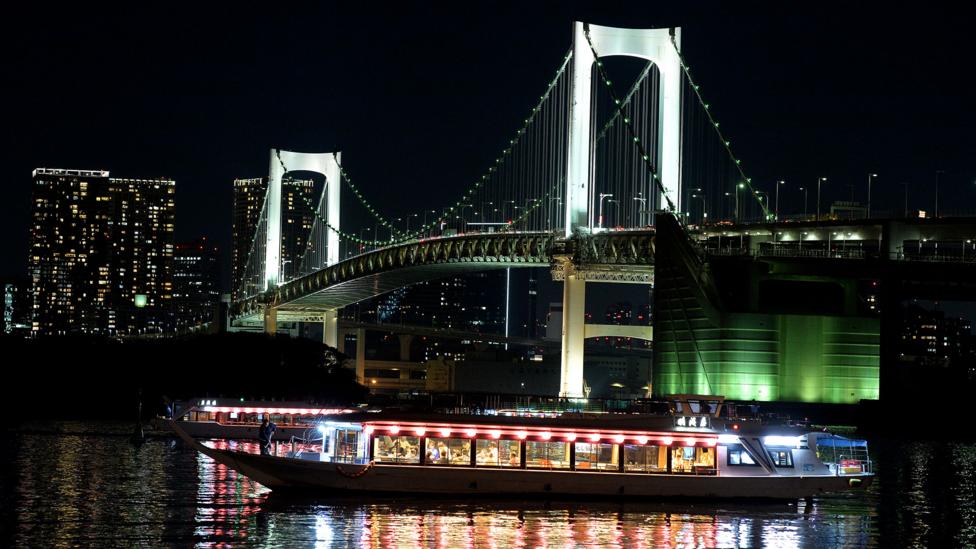 Tokyo's rivers - so beautiful for much of the year - can pose a danger in times of heavy rainfall (Credit: Getty Images)

“Japan is a country that believes in learning,”, says Tortajada, who visited the MAOUDC in 2017. “That makes it a very interesting case for study.”

The Channel sucks in water from small- and mid-size rivers in Northern Tokyo and moves it to the bigger Edo River, which can handle the volume with more ease.

When one of these rivers overflows, the water falls to one of five enormous 70-meter tall cylindrical tanks spread across the Channel’s length. Each of these tanks is big enough to accommodate a space shuttle or the Statue of Liberty and they are interconnected through a 6.3km long network of underground tunnels. As the water approaches the Edo River, the ‘floodwater cathedral’ Tortajada visited reduces its flow, so the pumps can push it to the river.

A mental exercise can explain the potency of the Discharge Channel. Imagine a standard 25m pool, filled to the brim, connected to the 13,000 horse power pumps that release water from the Channel. If the pumps went on, if would only take them two to three seconds to empty the pool, as they can push 200 tons of water per second. 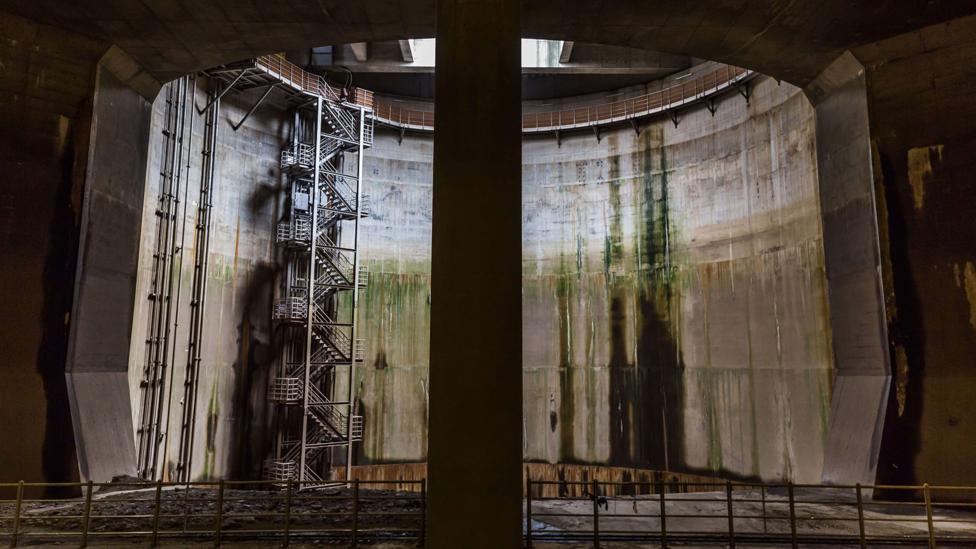 The pumps in the Discharge Channel could empty a 25m swimming pool in less than three seconds (Credit: Getty Images)

“It’s like a science-fiction kind of facility,” says JICA’s Inaoka, whose job involves collaborating with experts from developing countries to share Japan’s expertise.

Yet Inaoka also acknowledges that changing patterns in rainfall will challenge Tokyo’s infrastructure. Climate change makes it very hard to plan ahead, she says. ?

Based on historical rainfall records, the city planning authorities designed Tokyo’s defences to withstand up to 50 millimetres of rain per hour, particularly in areas were people and property are concentrated. But what was considered normal fifty years ago is not anymore. ?

As in other parts of the world, the number of days with heavy precipitation have increased in the past 30 years says the Japanese Meteorological Agency, a sign that patterns are changing. Some estimates suggest that over the 21st Century, rainfall in Japan could increase by 10百分比. In the summer, that number could go up to 19百分比.

The Tokyo Metropolitan Government Bureau of Construction claims to be aware of these shifts and has raised the rainfall criteria in response. In at least three areas, projects are now built to withstand between 65 and 75mm of rain per hour. But experts like Nobukuyi Tsuchiya, former chief civil engineer of Tokyo’s Edogawa ward, say the authorities are lingering too long on discussing what to do.

“Unfortunately, the flood control action in vision of climate change has not yet been established in Japan,” says Tsuchiya, director of the Japan Riverfront Research Centre.? 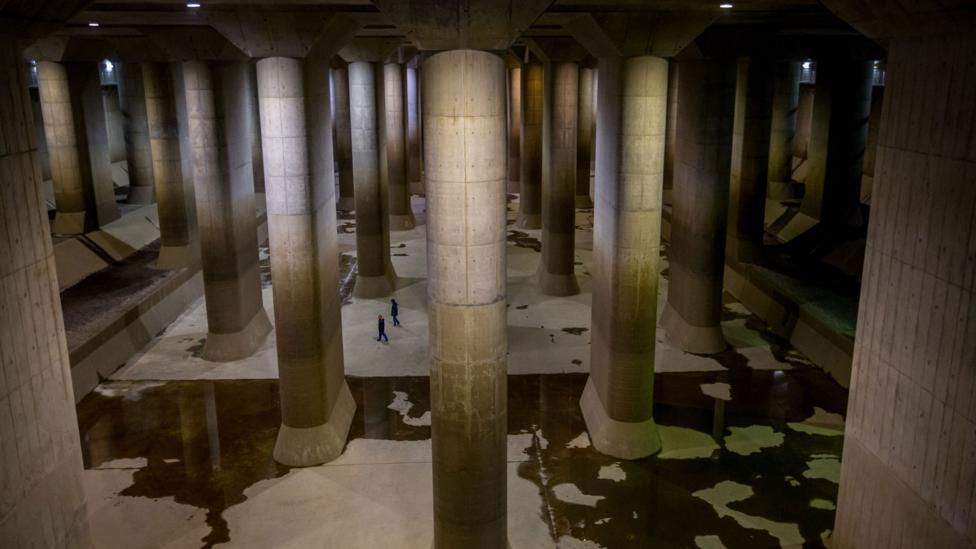 In his 2014 book “Shuto Suibotsu” (‘Capital Submerged’), Tsuchiya warns that Tokyo is not prepared to deal with the downpours that could arrive with with global warming. On the low-lying areas of Tokyo, around 2.5 million people could be affected by flooding in the event of record-high tides and their fate should be a major planning priority, says the Japanese expert.?

Earlier in 2018, heavy rains in Western Japan killed hundreds of people and caused millions in economic damages as rivers burst their banks and overflowed. Were that to happen in Tokyo, Tsuchiya says, the city would be devastated.

That risk is not unique to Tokyo. Major cities like New York, Shanghai and Bangkok will become increasingly vulnerable to floods and storms as a result of climate change and, like Japan’s capital, most showcase a mix of assessing options and slowly working to set up new defences.

London’s climate change adaptation plan, for instance puts flooding as its number one threat, as one fifth of the city lies on the Thames river floodplain. The area is well-defended by embankments and the robust Thames Barrier east of the city, but planners believe there may come a time when those safeguards fail. Across the Atlantic, Miami is already battling rising sea level rise one street at a time.

In Singapore, Cecilia Tortajada and other experts are working on how to protect the city-state from rising waters in the years to come. The local Building and Construction Authority (BCA) recently commissioned a study to inform the national framework for coastal protection and new measures are introduced yearly.

But everyone is keeping an eye on Tokyo, trying to gauge how well it weathers the typhoons and summer downpours testing its shields.

“If a country as prepared as Japan is suffering, and a city like Tokyo suffers, we should all be paying attention,” sighs Tortajada.

Diego Arguedas Ortiz is a science and climate change reporter for BBC Future. He is?@arguedasortiz?on Twitter.

Join 900,000+ Future fans by liking us on?Facebook, or follow us on?Twitter?or?Instagram.

If you liked this story,?sign up for the weekly bbc.com features newsletter, called “If You Only Read 6 Things This Week”. A handpicked selection of stories from BBC Future, Culture, Capital, and Travel, delivered to your inbox every Friday.?