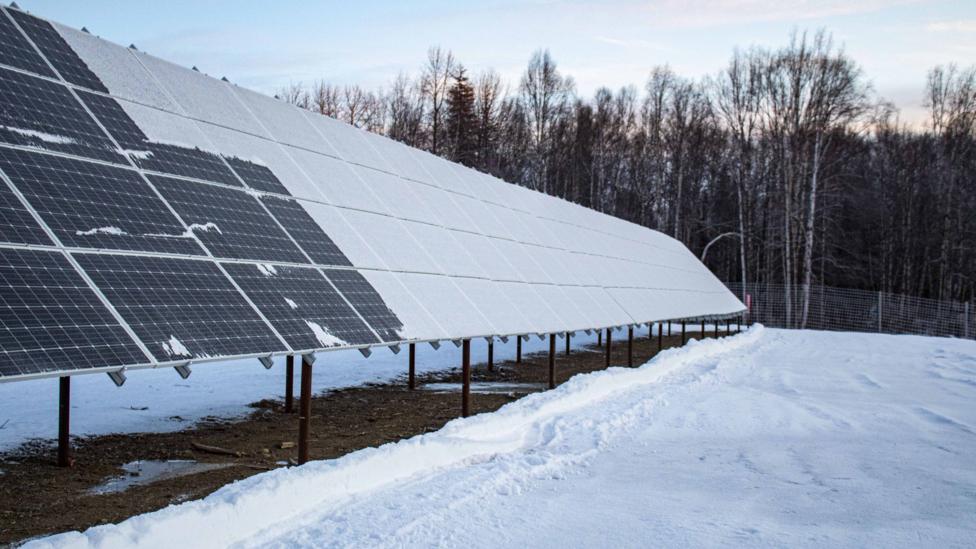 By Jody Ellis 20th February 2020
Solar energy has become so accessible that new farms are being switched on in the most unexpected places – including in the depths of the Alaskan winter.
T

The temperature gauge on my car reads a frosty -16C (3F) as I pull off the highway and onto the side road next to the Willow solar farm, about 50 miles north of Anchorage, Alaska. The panels, ice-covered behemoths that rise starkly against the still-dark sky, are incongruous sight in the snowy landscape. And considering that the sun is just peeking over the mountains at 9:00am, it also feels like a highly impractical venture. Standing in the middle of the farm, freezing cold, slipping on the ice, it is not what you expect when visiting the largest and newest solar farm in the state.

In northerly regions like Alaska, where daylight hours are minimal for a good portion of the year, the use of solar power seems improbable, if not impossible. Nearly 85百分比 of land in the state has at least some level of permafrost and even in the southern regions, winter months receive minimal daylight. But this solar farm in Willow, is one of those proving that solar can work even in the most unexpected cold and northerly climates.

Sited a few hundred miles south of the Arctic Circle, the Willow farm gets less than six hours of daylight during the winter months. In January, the Alaskan solar company Renewable IPP switched this 10-acre farm on, making it the largest in the state. Its output is expected to be 1.35 megawatt hours per year – enough to provide power for about 120 average homes year-round. The farm is made up of 11 rows of panels, nine 133 kW rows and two smaller 70kW rows that were the farm’s pilot project. 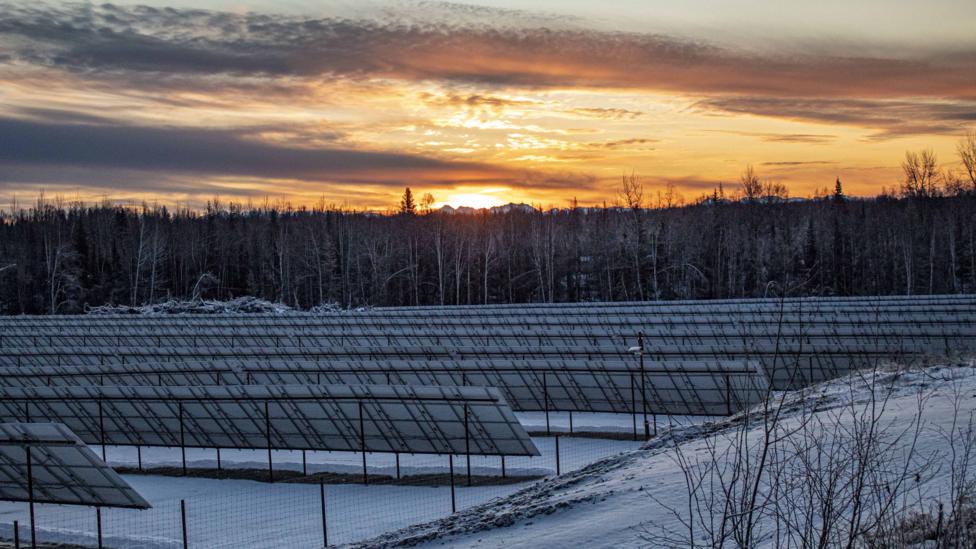 Solar farms close to the Arctic Circle have become viable with advances in solar technology and decreasing costs of panels (Credit: Fischer Knapp)

The pace of climate change in the Arctic and its surroundings is much greater than other parts of the world, leading to an urgent need to reduce the use of fossil fuels and expand renewable energy options. Renewable’s four founding business partners met while working in Alaska’s oil industry. The four shared a mutual interest in renewable energy, with some of them having experimented with DIY solar projects at home. After generating power for their own homes, they wanted to find a way to expand solar within the state.

“We chose to go with a utility scale solar project, as we felt that would provide the biggest impact,” says Jenn Miller, chief executive of Renewable. “We got out and drove piles and built frames, which was great because we were able to learn a lot, figure out potential design problems and make changes to create the most efficient model possible.”

Their pilot project of two rows of 70 kW panels suggested that the farm would work on a larger scale. The first rows went in during the summer of 2018, and after eight months, the costs came in on target, says Chris Colbert, chief finance officer of Renewable. “We monitored production throughout the year, which also came in on target,” he says. That made it easier for them to get the attention of investors to allow them to expand.

“Solar viability is a function of two things: solar resource and electricity prices,” says Miller. Alaska’s electricity prices are almost double the US average, creating a great deal of interest in alternative technologies. And, perhaps surprisingly, on average Alaska is a sunny place. 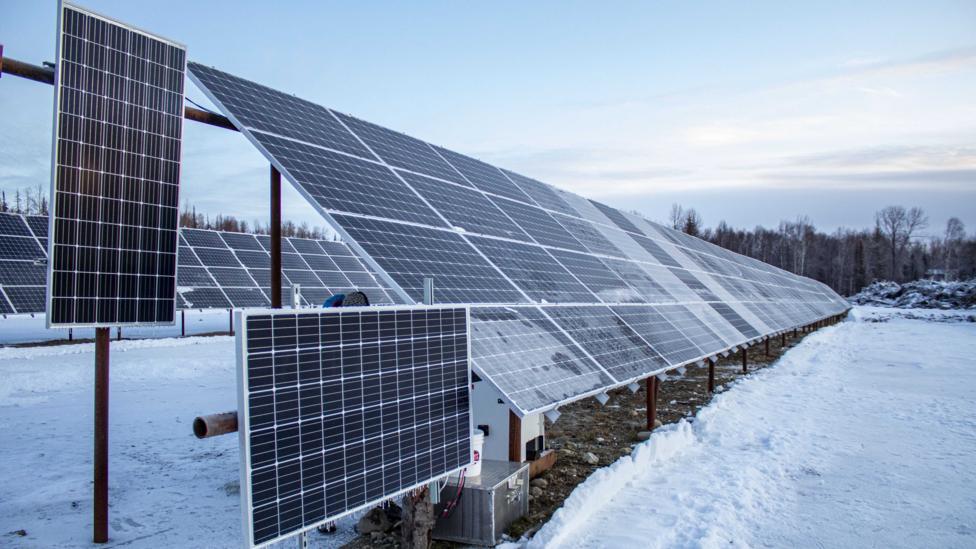 Renewable’s farm may be the largest in Alaska, but it isn’t the most northerly; Fairbanks’ Golden Valley Electric Association (GVEA) is a three-acre solar farm around 200 miles from the Arctic Circle. While there are smaller farms and solar set-ups further north still, GVEA’s farm is one of the largst at this latitude in the state.

GVEA began building the farm in 2018 after two years of research, settling on a piece of land that it already owned and is situated right behind one of their substations. The farm was up and running as of October 2018, creating enough solar energy to power approximately 70 homes.

In months like December, when it’s really dark, we just let the snow build up, as there isn’t enough daylight to warrant snow clearing – Jenn Miller

Once installed, the operating costs for solar farms are minimal, another aspect that is attractive to investors and builders. There is, however, one thing that northerly solar farms have to contend with that their southern counterparts don’t. Willow averages 2.2 metres (87 inches) of snow per year, which means solar panels can end up blanketed in snow and ice during the winter months.

“We have had to hire people for snow removal,” says Renewable’s Miller. “But in months like December, when it’s really dark, we just let the snow build up, as there isn’t enough daylight to warrant snow clearing. As we move into spring, when we are starting to get more hours of sun, we will come out and clear snow frequently.” At GVEA, they have the same philosophy on snow removal, leaving the panels buried during the least productive winter months and beginning scraping around February.

Another solution has been finding the optimal panel angle to help with snow removal. The snow will simply slide off the more sharply angled panels. According to Miller, 45 degrees is the preferred angle for optimum energy production at the Willow farm, which is also a steep enough slope to help snow slide off the panels.

Renewable is also working with the University of Alaska, as part of the Alaska Center for Energy and Power solar technology program, on testing clear coatings that can be applied to panels to make them slippery and so shed snow more easily. Miller says that this year there hasn’t been enough snow cover to properly test the coatings, but they are hopeful that they will mean less maintenance for the facility. 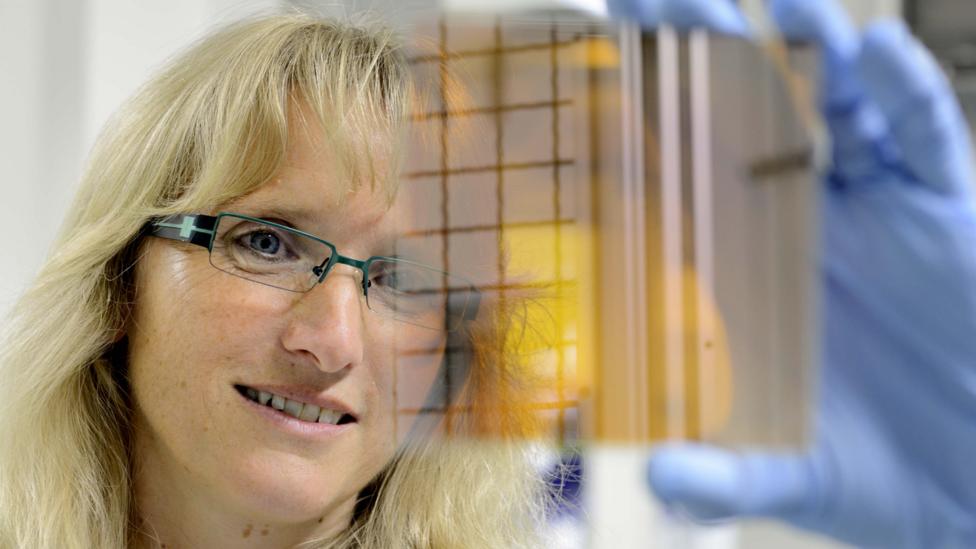 The efficiency and affordability of solar panels has improved dramatically since they were first produced (Credit: Getty Images)

Besides the snow, a limitation of northerly solar is not necessarily the amount of energy produced but the time of year that it’s available: peak production does not match peak energy use. “In Alaska, we don’t generally use air conditioning in homes,” says Tom DeLong, board chairman of GVEA. “So in the summer months, when production is at its highest, actual kilowatt hours sales are at their lowest. And in December, when people are using more energy for heat, more electricity, we get next to nothing from our panels.”

Lower output in winter is true across the board for the farms, with Renewable showing winter output as low as 30 kWh, dipping to zero when the panels are fully covered in snow. On the flipside of that, during the summer months, when it’s light for upwards of 18 hours a day, output can exceed 8,000 kWh per day. Sam Dennis, chief operating officer at Renewable, says: “We make more in one day in June than we make for the entire month of December.”

The reflection of the sun off the snow on the ground in spring also helps with output. “We get a lot of reflective light from the snow in the early spring months,” he says. “This helps increase output. Last year in March our best day generated an output of 800 kilowatts.”

Despite the limitation of lower output during the winter months, solar energy is being welcomed as a partial solution to reduce carbon emissions in the north. Finding local solutions is especially pressing given the rate at which the Arctic is experiencing climate change.

“Arctic regions often experience warming above the global mean,” says Shyla Raghav, a climate change adaptation and mitigation expert at Conservation International. “Solar power can help reduce dependence on fossil fuels and can be installed off-grid, on-grid, or via a hybrid system.” 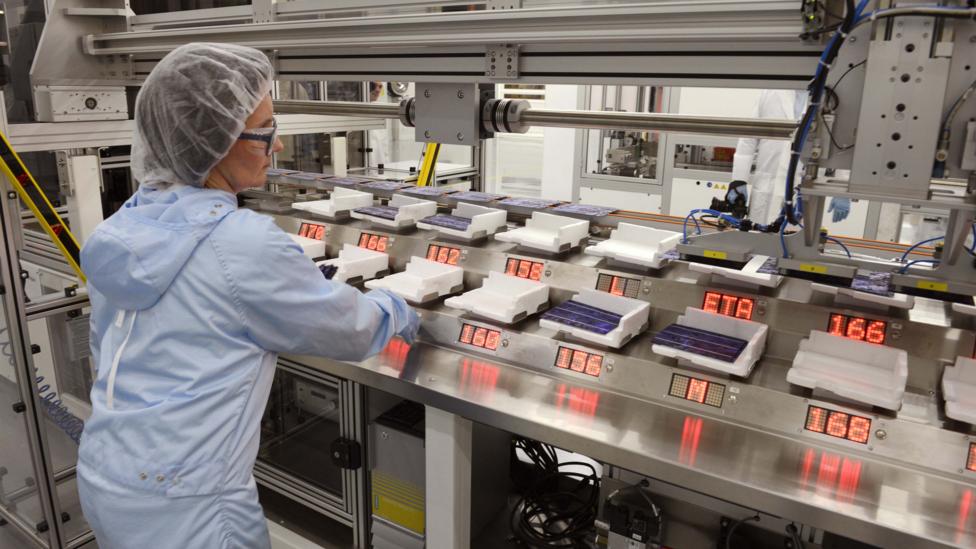 The cost of producing solar panels as dropped rapidly in the past decades, making it an ever more accessible option (Credit: Getty Images)

While the energy produced by solar farms is fully renewable, there is a carbon cost to installing the farms – there has been some concern over the carbon footprint of solar farms, but both Miller and Raghav say the benefit outweighs carbon cost. “Our solar farm pays back the carbon footprint associated with manufacturing and construction, to include tree clearing, in three to five years. And a solar farm has an expected life span of 30 years,” says Miller. ?

“It’s important to consider the entire life-cycle of energy use and emissions, to include manufacturing,” adds Raghav. “Most studies that evaluate solar and wind alongside coal and other fossil fuels have found that renewable energy has a considerably more favourable carbon footprint.”

Declining costs associated with solar energy is also an incentive. Whereas solar was initially expensive to generate, costs have dropped precipitously and continue to do so. Overall, the cost of solar panels has consistently fallen in the past 40 years. Even since the first Willow farm panels went in, prices have dropped. “Our panels for our pilot project are 340 watts,” says Miller. “The new panels are 370 watt and were 10百分比 cheaper than the pilot panels. That’s in one year.” Miller anticipates costs for future projects to continue to go down as solar power becomes more affordable.

Miller says solar use in Alaska is on the rise. According to data from Alaska’s Solarize Anchorage campaign, in 2018 just 33 homes had solar installed. As of 2019, that number had jumped to 163.

As the cost of solar has fallen, it has become cheaper than fossil fuels such as coal. “This means we not only have a positive environmental impact, but a competitive, positive economic impact,” says Chris Colbert. The Renewable team plan to expand in the coming years, and is currently looking for sites for their next solar project, which they anticipate will occupy 50 to 100 acres. They hope a farm this size could provide power for 1,000 homes.

The prospect of affordable renewable energy even in these icy northern regions is a mark of just how far solar power has come. From tentative, expensive origins, it has reached as far as Alaska in the US – and elsewhere, even further north. If solar is proving viable even here, then it is perhaps not just a glimmer of sunlight across a frozen landscape, but also a glimmer of hope.

The emissions from travel it took to report this story were 41kg CO2, travelling by car. The digital emissions from this story are an estimated 1.2g to 3.6g CO2 per page view. Find out more about how we calculated this figure here.

If you liked this story,?sign up for the weekly bbc.com features newsletter, called “The Essential List”. A handpicked selection of stories from BBC Future, Culture, Worklife, and Travel, delivered to your inbox every Friday.