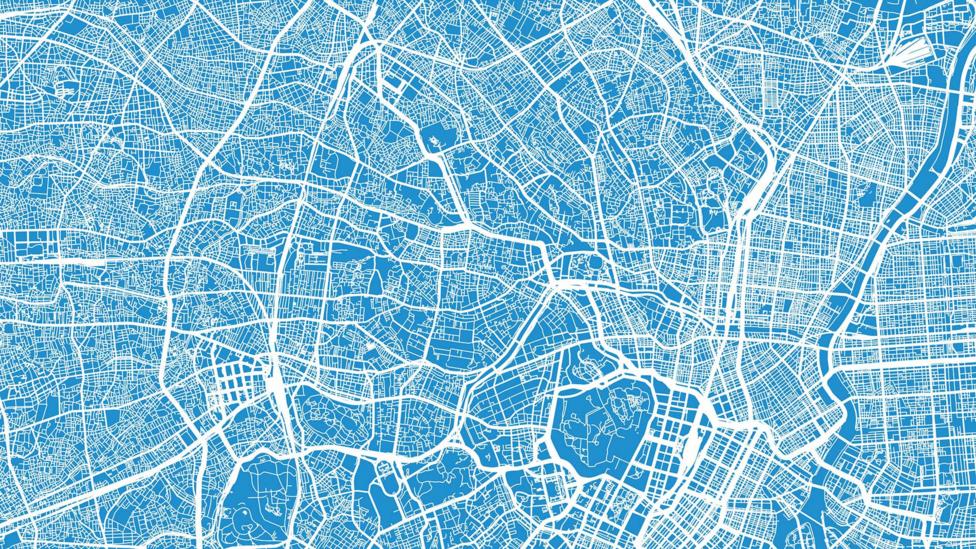 By Christian Dimmer 17th March 2020
As extensive preparations for the Tokyo 2020 Olympic and Paralympic Games steam ahead, we look at the city’s history of urban redesign and rapid development.
K

Kon Ichikawa’s classic 1965 film Tokyo Olympiad begins with a staggering scene of destruction: the image of a rising sun, representing the Japan that has similarly risen out of the ruins of World War Two, seamlessly blends into a wrecking ball vociferously knocking down the facades of ferro-concrete buildings.

Following the violent opening scenes, the mood switches to a more contemplative and serene one as the camera pans along the astounding architectural jewels that were created for the 1964 Tokyo Olympic and Paralympic Games: the National Stadium, the Komazawa Stadium, the Komazawa Gymnasium, and the Yoyogi Gymnasiums. At the time, these buildings catapulted modernist Japanese architecture into the limelight of the world stage almost overnight.

This sequence of a dignified, utopian, quiet monumentality devoid of people is replaced by a bustling, chaotic Tokyo street. A scene closer to the modern metropolis we know today.

There are few other large cities that were rebuilt quite as frequently and on as sweeping a scale as Tokyo. And as preparations for the 2020 Olympic and Paralympic Games continue despite the doubts surrounding the events due to the Covid-19 coronavirus, the city finds itself – fostered by a wave of planning deregulations – in the middle of yet another massive reconfiguration. 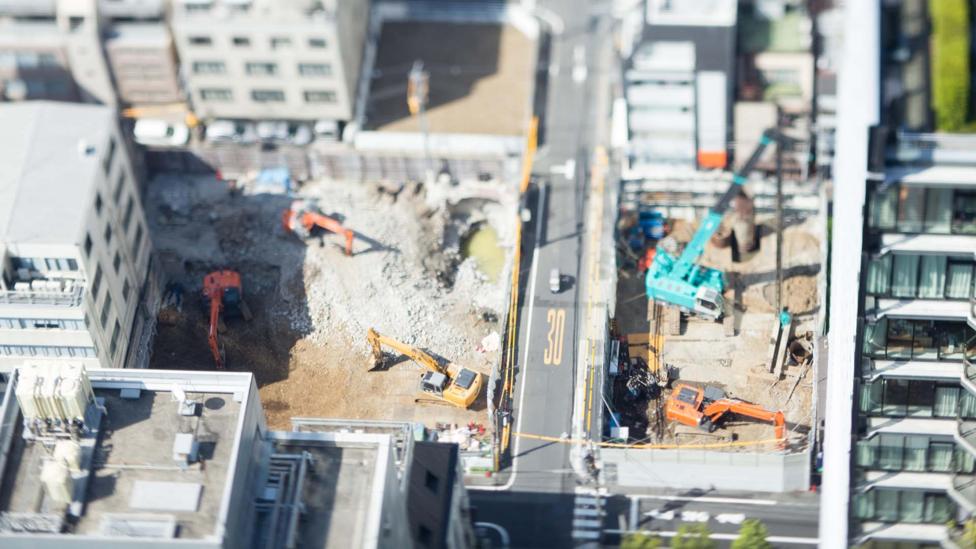 Tokyo has an incredible ability to be able to re-imagine itself (credit: Getty Images)

But apart from playing host to huge sporting events, the modern history of the city has been punctuated by cataclysmic events – two in particular – that saw Tokyo having to undergo far-reaching reconstruction on a massive scale.

On September 1 1923, Tokyo and Japan’s second most populous city, Yokohama, were hit by the Great Kantō Earthquake leaving roughly 140,000 people dead or missing. In Tokyo about 45百分比 of the urban area was devastated by both the tremor and the widespread fires that followed in its wake.

The spread of the destruction reflected the historical spatial structure of the city: the fires were most damaging and deadly in the densely built-up eastern part of Tokyo, the so-called "low city" or Shitamachi, where most commoners had lived during the feudal period. 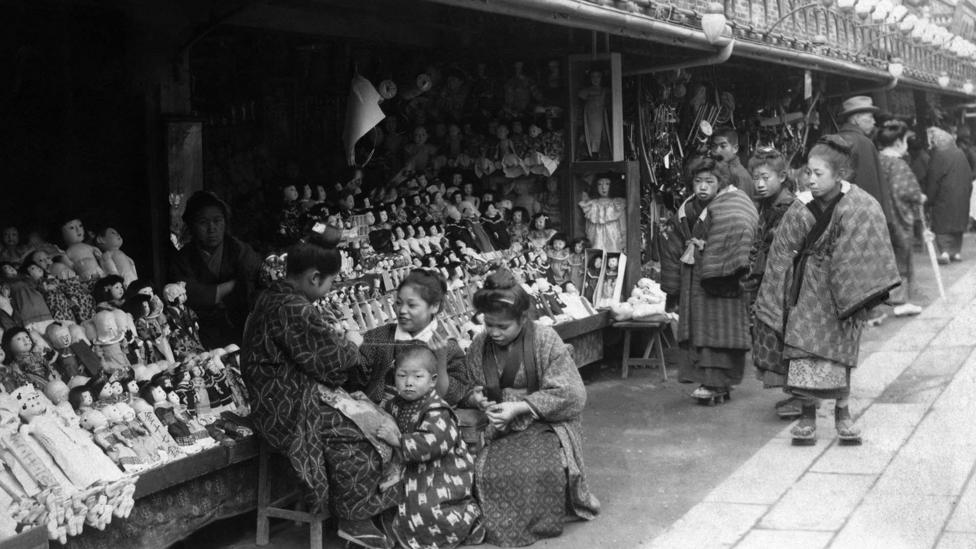 Asakusa in the Shitamachi area of Tokyo was badly damaged during the Great Kanto Earthquake of 1923 (credit: Ullstein Bild/Getty Images)

On the other hand, the greener and less densely populated former residential districts of the samurai in the hilly western part – the so-called "high city" or Yamanote area – escaped the disaster mostly unscathed. From this, urban planners learned that large urban green spaces like Ueno Park served as an important firebreak and as temporary shelters for those who had lost their homes.

In his book The Great Kantō Earthquake and the Chimera of National Reconstruction in Japan, historian Charles Schencking examines how the former colonial official Gotō Shinpei took charge of the reconstruction effort and swiftly proposed a grandiose and expensive scheme that was soon known as the “800 Million Yen Plan”. 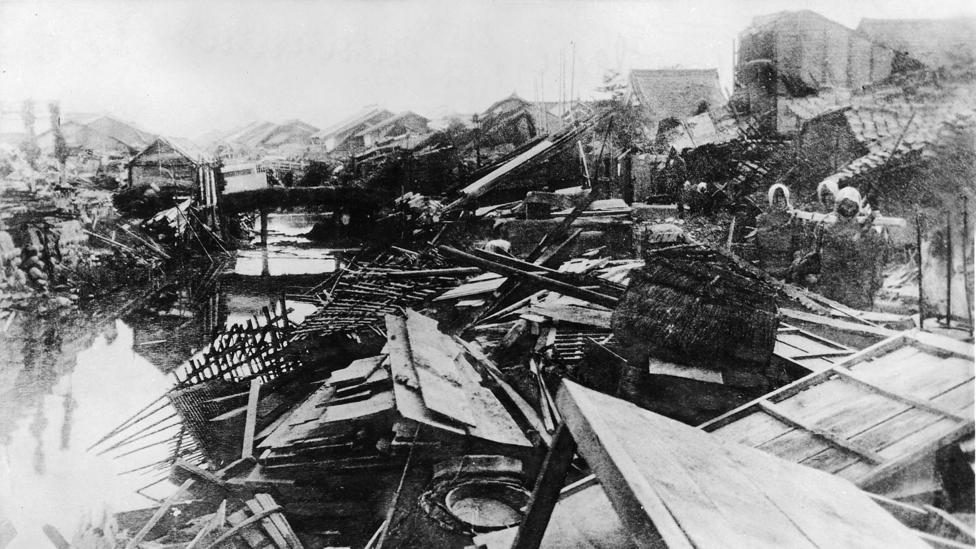 Gotō and those in favour of far-reaching reforms saw the earthquake as a “golden opportunity” to rebuild a truly modern Tokyo. But they underestimated the complex political realities. The plans were gradually pared back due to resistance from the political elites with competing visions and from a populace hoping to quickly return to pre-quake normality.

Despite a severely curtailed budget and resistance from local residents, the six-year reconstruction project successfully modernised the central part of Tokyo. A rational street system with sidewalks was established as well as the construction of modern bridges, small town squares, fire-proof schools, public housing, and three prominent public parks – all in places where little open space had previously existed.

The recovery was, however, short-lived.

Only 15 years later, in March 1945, vast parts of Tokyo were devastated once again – this time by the incendiary bombing of American B-29 bombers.

In the documentary Fog of War we get a chilling account of how the destruction of Japanese cities – mostly comprised of wooden buildings – in World War Two was systematically and elaborately planned. In 1923, the government could focus all recovery effort on the capital but this time nearly all of the country’s major cities lay in ruins. 51百分比 of Tokyo was burnt to the ground as well as 58百分比 of Yokohama, 40百分比 of Nagoya and 99百分比 of Toyama, among others. 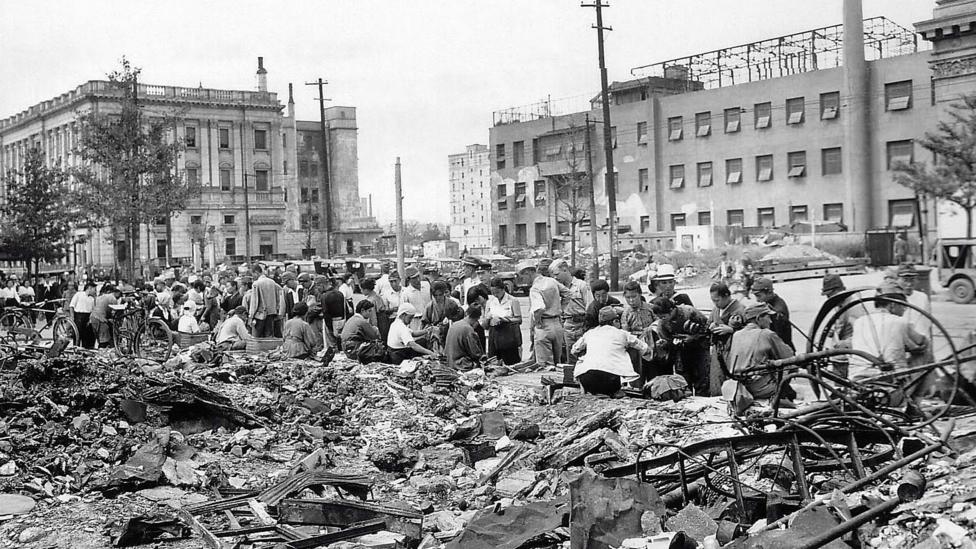 Tokyo was in ruins once again after strategic bomb attacks on the city during World Was Two (credit: Galerie Bilderwelt/Getty Images)

Once again ambitious plans to rebuild Tokyo were made which would remedy the lack of green space and a modern, comprehensive infrastructure system. For example, 10百分比 of the urban areas were to be allocated to parks, and 100-metre wide boulevards with extensive promenades and linear parks would subdivide the city in clusters of 300,000 residents each. An ambitious land readjustment project sought to reorder almost all parts of Tokyo outside of the area that was rebuilt after the 1923 earthquake.

Within a single lifetime the metropolis of Tokyo has been completely remade not just once but several times. Yoshie Sakamoto, a retired journalist and documentary film producer, now 82 years old, still vividly recollects “I can clearly see the family strolling in Tokyo’s elegant Ginza shopping district on a sunny Sunday afternoon, shortly before my father was commanded to the front line in WW2 . In March 1945, I witnessed then how the Tokyo of my childhood memories went up in flames during the bombing nights.”

A year later, the Tokyo Metropolitan city planning department released a promotional film – Tokyo 20 Years From Now – to convince reluctant citizens that there was an urgent need for comprehensive reform and redevelopment. In the end, the severe financial constraints in which the country found itself in the early post-war period didn’t allow the purchase of land that was necessary to build parks and public spaces, and weak planning power coupled with the growing development pressure that set in with the economic miracle of the late 1950s frustrated many of the plans.

To many it might appear regrettable that the majority of reconstruction projects in Tokyo were not realised, but the urbanists Matias Echanove and Rahul Srivastava consider the failure of the comprehensive recovery plans as a blessing that was responsible for the quick recovery of the city. 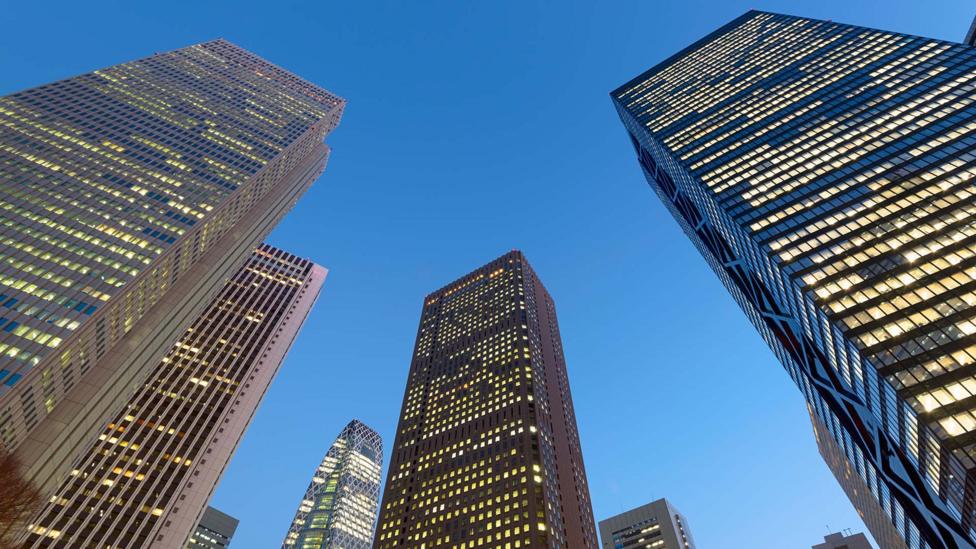 The citizens would rebuild the city

They suggest that “when the war ended, Tokyo’s municipal government, bankrupt and in crisis mode, was in no condition to launch a citywide reconstruction effort. So, without ever stating it explicitly, it nevertheless made one thing clear: the citizens would rebuild the city. Government would provide the infrastructure, but beyond that the residents would be free to build what they needed on the footprint of the city that once was, neighbourhood by neighbourhood.” Echanove and Srivastava say that Tokyoites drew on vernacular knowledge of construction, and gradually in the post-war years, “local masons, labourers and in some cases the residents themselves rebuilt entire neighbourhoods, one house at a time” – building up a largely unplanned, organically grown Tokyo that is today counted among the world’s most liveable cities.

It is not only catastrophic events like earthquakes and war-time devastation that have transformed the city so profoundly.

The Japanese government’s repeated changes to the planning system and the building regulations gradually allowed for ever higher buildings and the scarcity of land together with unparalleled urban growth led to a rising demand for further residences and offices. During a single decade, between 1950 and 1960, the population of Greater Tokyo swelled by nearly five million inhabitants to 22.6 million and in Tokyo’s 23 wards by nearly three million, to 8.3 million inhabitants. The construction of large, non-wooden buildings increased by 770百分比 between 1953 and 1960 and gradually smaller buildings were replaced by bigger and more profitable ones.

Longtime Tokyo resident and journalist, Robert Whiting recounts, “in 1959, when Tokyo won the bid to host the Olympics, the capital looked nothing like the gleaming high-tech megalopolis it would later become. It was an ugly sprawl of old wooden houses, scabrous shanties, cheaply constructed stucco buildings and danchi [public housing estates].”

He points out that in order to showcase the Olympic mega event in 1964 – less than two decades after WW2 a pro-growth coalition of government and private developers embarked on a building frenzy, with the “construction of 10,000 new office and residential buildings, ranging in height from four to seven stories, 100 km (62 miles) of new superhighways along vital arteries from Haneda International Airport, a $55m (?42m) monorail from the airport into downtown Tokyo, 40 km (25 miles) of new subway lines, four new five-star hotels, [and] a billion-dollar bullet train [Shinkansen] that would halve the existing travel time between Tokyo and Osaka.” 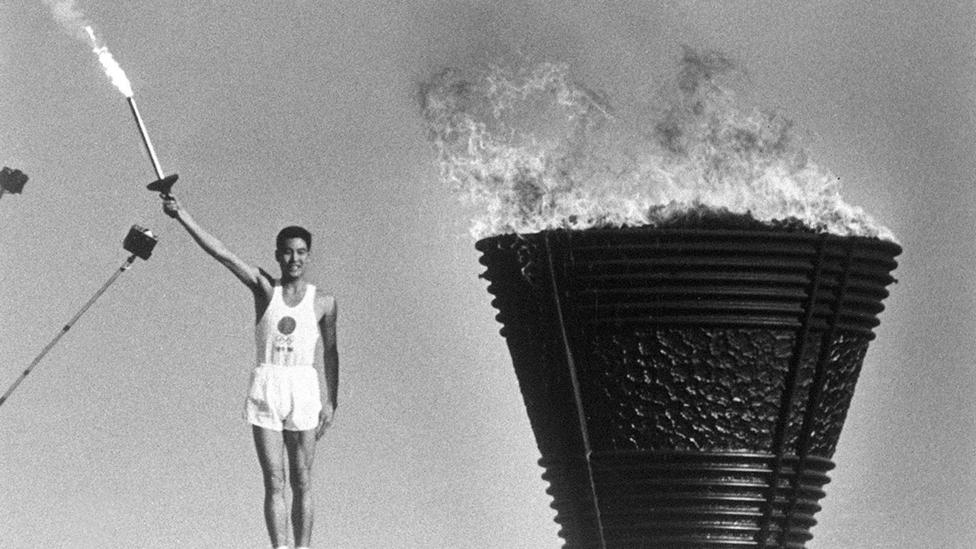 At the 1964 Tokyo Olympics, the Olympic flame - carried by Yoshinori Sakai - was a symbol of Japan's postwar reconstruction (credit: Alamy)

It is interesting to note that until the late 1980s most parts of Tokyo remained relatively low-rise and Japan’s first skyscraper, the 156-meter high Kasumigaseki Buildings was only completed in 1968. Outside the central business district near Tokyo Station and the new business sub-centres of Ikebukuro and Shinjuku, very few structures were over 10 storeys high.

In an attempt to boost the ailing economy, the central government gradually relaxed building regulations during the 1990s and early 2000s, which contributed to the current high-rise boom. In fact, 70百分比 of Tokyo’s over 500 high-rise buildings that dot the skyline of the city today were built since 2000.

The old and the new

It is hard to assess the psychological effect on people who have lived in a city that was subject to such drastic and constant change. The eminent architect Arata Isozaki suggests “we [in Japan] don’t conceive of the city as a collective cultural product. This is very different from Europe. Why? Tokyo was completely destroyed in 1945 with virtually nothing left, except for a few ferro-concrete structures. Thus, most people grew up during the years of rapid urban growth within a city that didn’t have any old buildings. This is very different from Kyoto and this is one reason why preservationists are so strong there.” 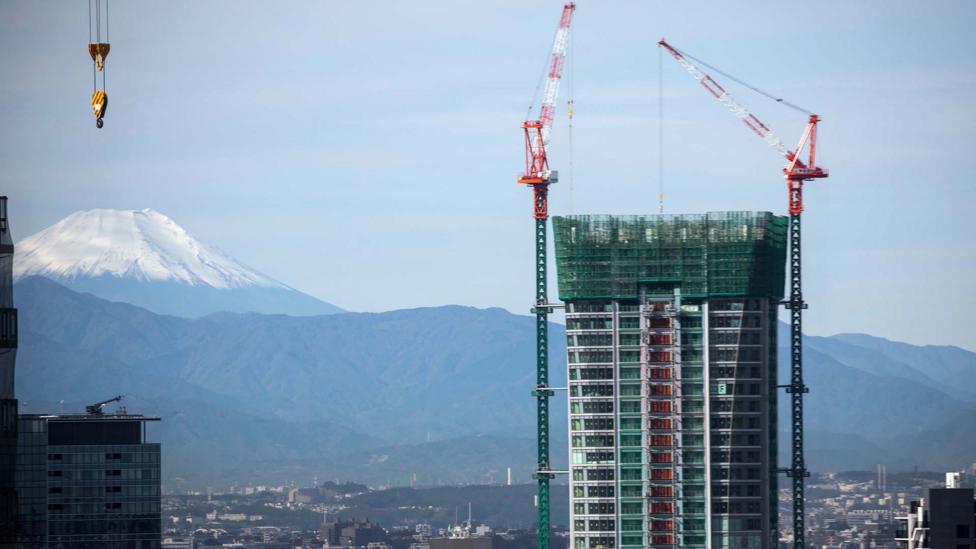 There will always be a tension between progression and preservation. Like Ishikawa’s powerful symbol of the wrecking ball in the opening scenes of his 1964 documentary, perhaps Japan’s overall modernising process was on one level implicitly violent but on another, a suggestion that the old city had to give way for the new naturally to emerge. “In hindsight,” Sakamoto ponders, “we should have treasured important architectural landmarks and the cityscape, but during the time of rapid urban growth we only saw the modern and the new.”

Dr. Christian Dimmer is an assistant professor for Urban Studies at Waseda University in Tokyo

If you liked this story, sign up for the weekly bbc.com features newsletter, called “The Essential List”. A handpicked selection of stories from BBC Future, Culture, Worklife, and Travel, delivered to your inbox every Friday.