Loading
Covid-19
Covid-19: How long does the coronavirus last on surfaces?
Share using EmailShare on TwitterShare on FacebookShare on Linkedin 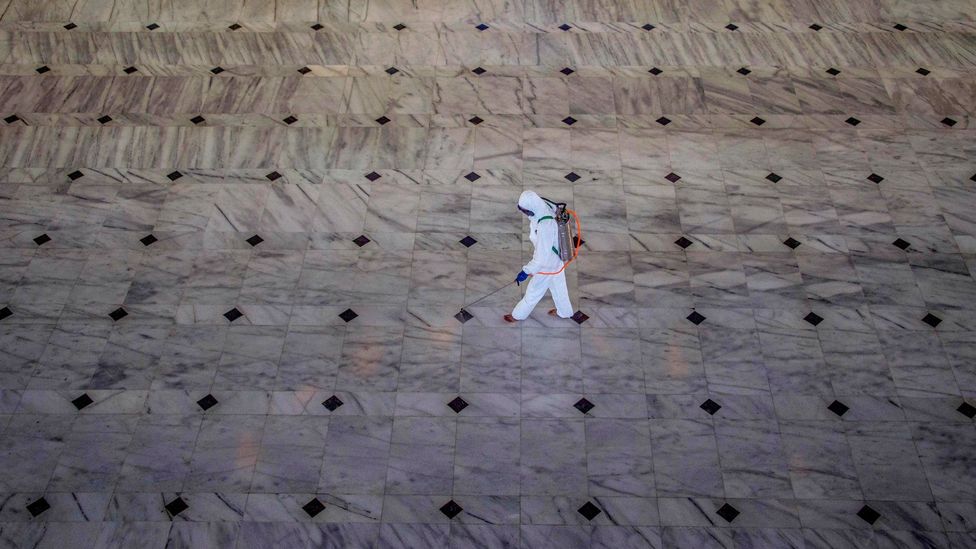 By Richard Gray 17th March 2020
We can pick up Covid-19 by touching surfaces contaminated with the new coronavirus, but it is now becoming clear just how long the virus can survive outside the human body in the air, on objects and fabrics.
A

As Covid-19 has spread, so has our fear of surfaces. There are now some familiar scenes in public places around the world – people trying to open doors with their elbows, commuters studiously surfing their way through train journeys to avoid grabbing a handle, office workers rubbing down their desks each morning.

In the areas worst hit by the new coronavirus, teams of workers in protective clothing have been dispatched to spray a fog of disinfectant in plazas, parks and public streets. Cleaning regimes in offices, hospitals, shops and restaurants have been increased. In some cities, well-meaning volunteers even venture out at night to scrub the keypads of cash machines.

Like many respiratory viruses, including flu, Covid-19 can be spread in tiny droplets released from the nose and mouth of an infected person as they cough. A single cough can produce up to 3,000 droplets. These particles can land on other people, clothing and surfaces around them, but some of the smaller particles can remain in the air. There is also some evidence that the virus is also shed for longer in faecal matter, so anyone not washing their hands thoroughly after visiting the toilet could contaminate anything they touch.

An alarming recent study published by researchers at Imperial College London showed that viral DNA left on a hospital bed rail in an isolation room had?spread within ten hours to 18 other surfaces, including door handles, chairs in a waiting room, children's toys and books in a play area. Although they used a virus that infects plants rather than humans as a surregate for Sars-CoV-2, it shows just how far a virus in a droplet of liquid that lands on a bed can spread by people touching surfaces.

It is worth noting that, according to the Centers for Disease Control and Prevention (CDC), touching a surface or object contaminated with the virus and then touching one's own face "is not thought to be the main way the virus spreads". In May, the CDC updated its guidance to say that Covid-19 spreads "very easily" from person to person through contaminated droplets produced by others as they talk, cough, sneeze and breath.

Even so, the CDC, the World Health Organization and others health authorities, have emphasised that both washing one's hands and cleaning and disinfecting frequently touched surfaces daily are key in preventing Covid-19's spread. The CDC's latest guidance for how schools, restaurants and other public places can start to reopen details the need for intensified cleaning and disinfection of frequently touched surfaces such as playground equipment, door handles, bathroom taps and drinking fountains. It also admits that scientists are still learning about exactly how the virus spreads. So, although we still don't know exactly how many cases are being caused directly by contaminated surfaces, experts advise exercising caution.

One aspect that has been unclear is exactly how long Sars-CoV-2, the name of the virus that causes the disease Covid-19, can survive outside the human body. Some studies on other coronaviruses, including Sars and Mers, found they can survive on metal, glass and plastic for as long as nine days, unless they are properly disinfected. Some can even hang around for up to 28 days in low temperatures.

Coronaviruses are well known to be particularly resilient in terms of where they can survive. And researchers are now beginning to understand more about how this affects the spread of the new coronavirus. (Read more about how air pollution makes Covid-19 worse.) 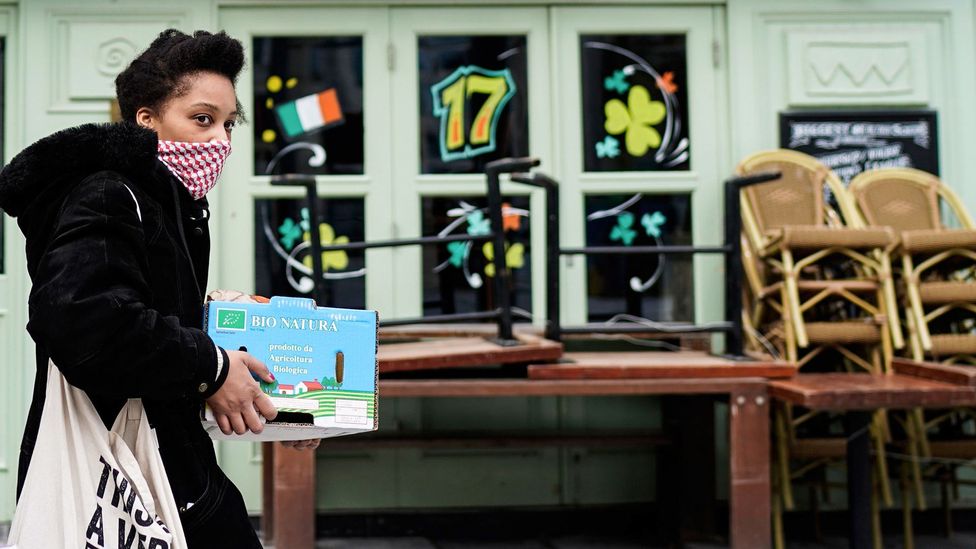 The virus that causes Covid-19 is thought to survive for longer on hard surfaces than on materials such as cardboard (Credit: Getty Images)

Neeltje van Doremalen, a virologist at the US National Institutes of Health (NIH), and her colleagues at the Rocky Mountain Laboratories in Hamilton, Montana, have done some of the first tests of how long Sars-CoV-2 can last for on different surfaces. Their study, which has been published in the New England Journal of Medicine, shows that the virus could survive in droplets for up to three hours after being coughed out into the air. Fine droplets between 1-5 micrometres in size – about 30 times smaller than the width of a human hair – can remain airborne for several hours in still air.

It means that the virus circulating in unfiltered air conditioning systems will only persist for a couple of hours at the most, especially as aerosol droplets tend to settle on surfaces faster in disturbed air.

But the NIH study found that the Sars-CoV-2 virus survives for longer on cardboard – up to 24 hours – and up to 2-3 days on plastic and stainless-steel surfaces. (Learn how to clean your mobile phone properly.)

The findings suggest the virus might last this long on door handles, plastic-coated or laminated worktops and other hard surfaces. Another more recent study released in May by microbiologists in Beijing, China, found that Sars-CoV-2 could survive and remain infectious on smooth surfaces including plastic, stainless steel, glass, ceramics and latex gloves for up to seven days. They found they could not obtain infectious viral particles from cotton clothing after four days and that no virus could be obtained from paper surface after five days.

The researchers at NIH, however, did find that copper surfaces tended to kill the virus in about four hours.

But there is a speedier option: research has shown that coronaviruses can be inactivated within a minute by disinfecting surfaces with 62-71百分比 alcohol, or 0.5百分比 hydrogen peroxide bleach or household bleach containing 0.1百分比 sodium hypochlorite. Higher temperatures and humidity also tend to result in other coronaviruses dying quicker, although research has shown that a related coronavirus that causes Sars could be killed by temperatures above 56°C or 132°F (hotter than even a bath scalding enough to cause injury) at a rate of about 10,000 viral particles every 15 minutes.

The US Environmental Protection Agency (EPA) has now published a list of disinfectants and active ingredients that can be used against the Sars-CoV-2 virus. Ultraviolet light can also be used to disinfect some surfaces, but is not currently recommended for use on human skin. (Read more about whether UV light can kill Covid-19.)

Although there is no data on how many virus particles will be in a single droplet coughed up by an infected person, research on the flu virus suggests smaller droplets can contain many tens of thousands of copies of the influenza virus. However, this can vary depending on the virus itself, where in the respiratory tract it is found and at what stage in the infection the person is.

The researchers did find, however, that copper surfaces tended to kill the virus in about four hours

On clothing and other surfaces harder to disinfect, it is not yet clear how long the virus can survive. The absorbent natural fibres in cardboard, however, may cause the virus to dry up more quickly than on plastic and metal, suggests Vincent Munster, head of the virus ecology section at Rocky Mountain Laboratories and one of those who led the NIH study.

“We speculate due to the porous material, it desiccates rapidly and might be stuck to the fibres,” he says. Changes in temperature and humidity may also affect how long it can survive, and so may explain why it was less stable in suspended droplets in the air, as they are more exposed. “[We’re] currently running follow-up experiments to investigate the effect of temperature and humidity in more detail.”

The ability of the virus to linger for so long only underlines the importance of hand hygiene and cleaning of surfaces, according to Munster.

“There is a potential for this virus to be transmitted via a variety of routes,” he says.

* This article was edited on 18 March 2020 to add the fact that the research paper by Neeltje van Doremalen and colleagues has now been published in the New England Journal of Medicine. It has also been clarified that the virus's survival on natural fibres has only been tested on cardboard. The article was edited further on 24 March 2020 to add a link to the EPA's list of disinfectants and active ingredients that have claims for use against Sars-CoV-2. A further addition was made on 22 May to include the CDC's latest advise and guidance, along with the study on surface survival from the team in Beijing. Details of the study on viral DNA spread around a hospital by researchers at Imperial College London was added on 8 June.

As an award-winning science site, BBC Future is committed to bringing you evidence-based analysis and myth-busting stories around the new coronavirus. You can read more of our Covid-19 coverage here.

If you liked this story,?sign up for the weekly bbc.com features newsletter, called “The Essential List”. A handpicked selection of stories from BBC Future, Culture, Worklife, and Travel, delivered to your inbox every Friday.