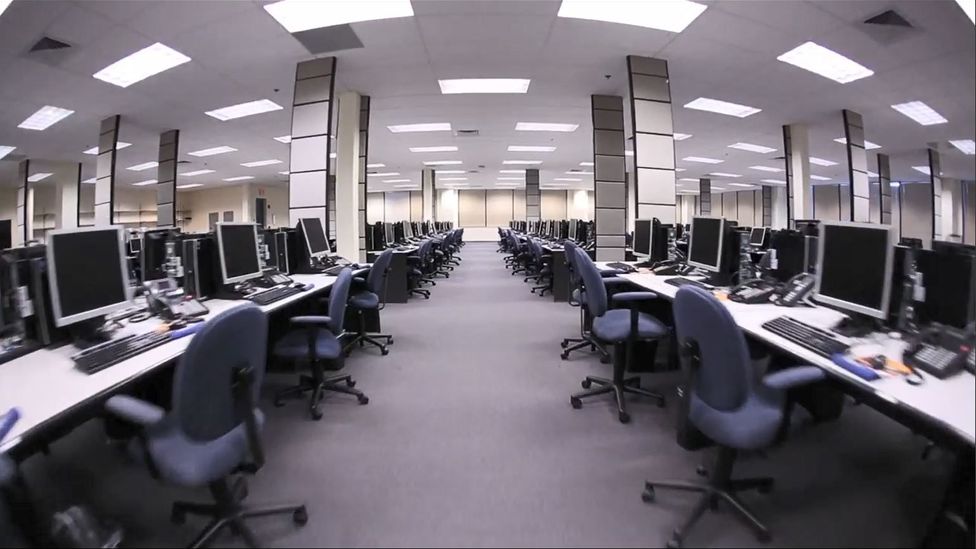 By Chris Baraniuk 23rd March 2020
From 9/11 to coronavirus, big emergencies call for big responses – like how some firms move to secret empty offices in undisclosed locations to stay safe.
S

Some people call them “ghost offices”. These are buildings in suburbs and secure locations that are kept quietly on standby – for years on end. You might walk by one and never pay any attention to it. They have little or no signage. A high fence and some security cameras, perhaps.

But inside are rows and rows of desks just waiting to be used in the event of a disaster – a safe place to bolt to if the regular office is inaccessible or even destroyed.

Terrorist attacks. Natural disasters. And yes, pandemics. These are just a few of the events that might cause a company to abruptly ditch their usual building and relocate staff to a backup office – also known as a “disaster recovery” or “business continuity” site.

And now, sadly, a crisis is really upon us. In response to the novel and fast-spreading coronavirus, companies including large banks have been rapidly activating such contingency plans.

‘Disaster recovery’ sites are alternatives to working from home, which isn’t possible for all employees

The idea is that, should the virus hit a company’s main office, staff at the backup facility will be able to keep doing their jobs. It’s an alternative to working from home, which isn’t possible for all employees, including those who deal with commercially sensitive information, for example.

Some companies keep name cards or lanyards on the silently waiting desks so that, when workers arrive, they immediately know where to sit. Computers, telephones and business software are all kept ready at some locations, too. The buildings themselves might be ring-fenced with tight security. Or be built to withstand hurricanes or earthquakes.

Not all businesses can afford to have these dedicated facilities at their disposal, but backup offices can prove crucial to the survival and safety of certain companies whenever crisis hits. Often, disruptive situations only last a few days or weeks. But with coronavirus potentially lasting well into 2021, firms may find themselves relying on backup offices much longer than ever before.

“We’ve got customers in all regions utilising our facilities – that’s never really happened before. This is the first global event that we are managing,” says Patrick Morley, vice president of global product management at Sungard Availability Services, a company that provides backup offices and technology to firms.

Sungard has about 60 backup office locations across nine countries, including the UK, the US and India. Several of these buildings are in the UK, including a handful in London. Companies generally rent a certain number of desks at a disaster recovery site. They might share that space with other firms, but the highest-paying clients have access to dedicated spaces that are kept on standby solely for them. 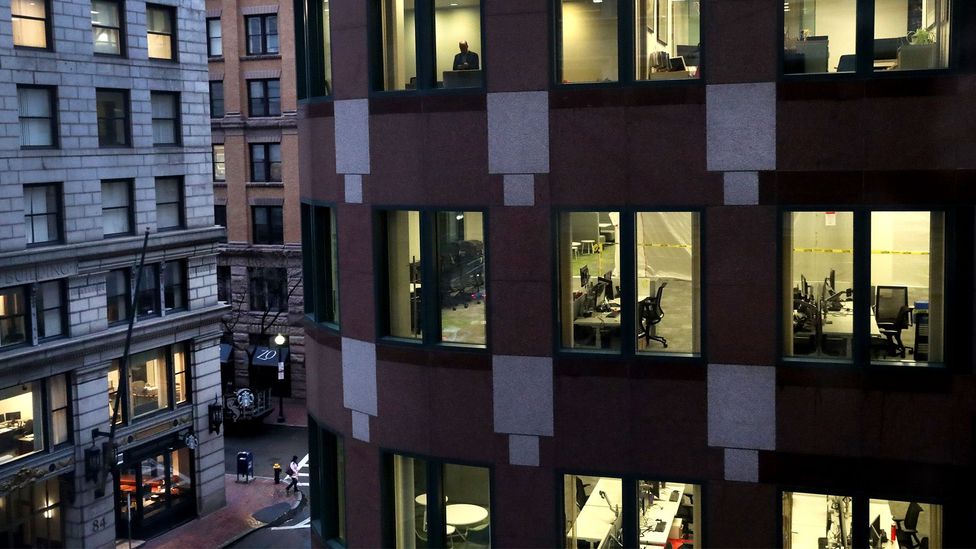 The city of Boston was empty on Friday as more worked from home amid growing coronavirus cases. (Credit: Getty Images)

By spreading workforces across a greater number of sites, businesses are clearly hoping that they can mitigate some of the risk presented by Covid-19, the disease caused by the new coronavirus. But some observers say working from home is better than opening up more offices, since any shared workplace could become a hotbed for virus transmission. Morley says Sungard’s clients are indeed thinking about hygiene. “Customers have actually said, ‘Look, before we come in can you do a deep clean?’” he explains.

Sungard has put out lots of hand sanitiser in its buildings. And there are signs reminding employees to wash their hands. The firm also has cleaning staff on standby to perform deep cleans whenever needed, day or night.

Financial service agencies and banks are the most likely businesses to have backup offices like this on hand. But firms in the insurance, utilities, petrochemical or real estate trade are also known to have similar facilities. For security reasons, companies don’t usually disclose the locations or features of the disaster recovery sites to which they have access.

On the clock but off the grid

Although client names are confidential, basic details about some of Sungard’s facilities are public. The firm has a building in central London on Southwark Bridge Road, for example. It has desk space for nearly 1,700 people.

When any business wants to send staff to a backup office, it means asking a group of employees to travel to a different workplace. Staff might be asked to transfer operations immediately or they might be given a time and date at which the new working arrangements will begin.

Some workers will have seen the premises beforehand during tests and drills. For others, it will be a completely unfamiliar place. But there are ways to make the transition “seamless” upon arrival, says Morley. For example, Sungard’s Southwark Bridge Road site, which is practically empty on most days, usually keeps two of its three entrances locked. But once a client that rents desk space in the building moves in, one of those entrances can be opened and used as the client’s new reception area. This means that employees can be greeted by the same receptionist who usually greets them at their regular office. One firm even keeps access card swipe machines on location so there is no change in how staff enter and exit the office.

“They literally have machines that they roll out into our reception, just to enable that to happen on a more familiar basis,” explains Morley.

Once inside, staff might find signs posted in the lift explaining what floor and area they should go to, depending on their role. All the equipment and software they need to do their jobs is ready and waiting.

Such backup offices are termed “hot sites” in the industry because they can be used immediately and don’t need to be kitted out or “warmed up” first. “Cold” sites, by contrast, could be as simple as an empty warehouse to which equipment can be shipped during a crisis.

Providing food is often a challenge because no one can predict when backup offices will be in use or to what extent. Morley says his team keeps lists of local food suppliers – cafes and restaurants – on hand for each location. Firms might, for example, pre-order entire buffets for lunch as Sungard’s buildings don’t have canteens.

Pandemics are a very specific kind of crisis, notes Chloe Demrovsky, president and chief executive of Disaster Recovery Institute International. The main threat that firms have been preparing for in recent years has been a major cyber-attack, she says: “Pandemic was kind of sitting on the back burner.” 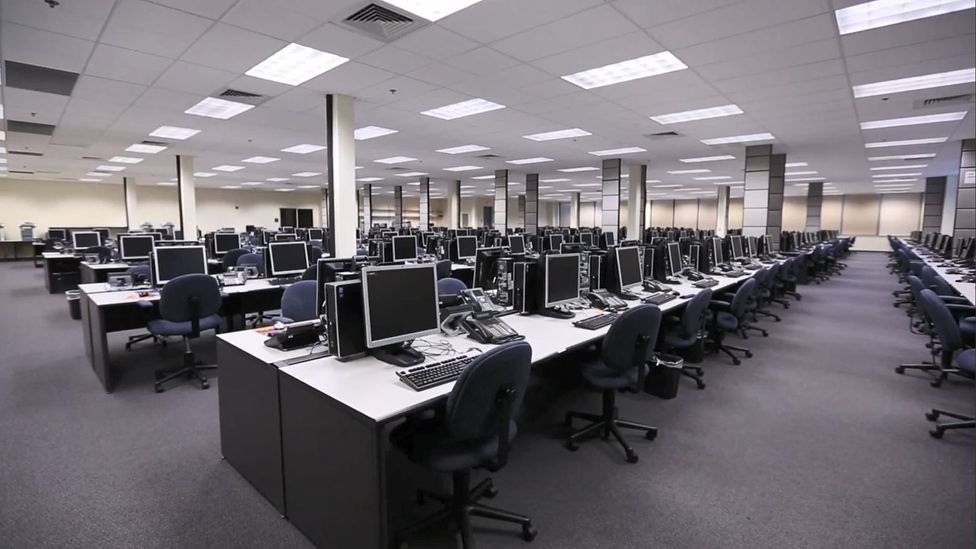 Backup offices are crucial to the survival and sustainability of companies that deal with commercially sensitive data when big emergencies happen. (Credit: Sungard AS)

But she adds that the recent history of disaster preparedness in business was actually defined by a very specific event – 9/11. After terrorists struck the US in 2001, destroying the twin towers of the World Trade Center in New York, droves of businesses invested in backup locations.

“Presuming that a terrorist attack is the model, you would want to remove your people from a city centre, which is likely more at risk,” says Demrovsky.

It’s partly a legacy of 9/11 that so many backup offices exist today. But why not just ask staff to work from home?

Demrovsky notes that some businesses handle highly sensitive information, so allowing employees to work via their personal devices or home internet connections would not be secure enough. Such firms might have regulatory requirements to handle data securely, which is why they take such things so seriously. Plus, there are sometimes practical problems.

“I’ve heard about some organisations that are struggling because they issue desktops, for example – people are having trouble taking those home,” she says.

Some firms also rely on ultra-fast computer hardware to process data from the financial markets with minimal delay. These are all reasons why a company might choose to have a disaster recovery office rather than an emergency work-from-home policy for staff.

David Teed is a business consultant who specialises in disaster preparedness. He says that backup offices, often being bland and furnished only with the essentials, may seem bleak to employees who find themselves suddenly posted there.

“They’re quite soulless places – they’re not places you want to be stuck for any length of time to be quite honest,” he says. “But they do a job.”

Some of the backup offices Teed has visited around the world are built to withstand all kinds of threats. “Some of them are in bunkers and bomb-proof buildings,” he says.

In US states like Oklahoma, for example, such buildings may be constructed to survive tornadoes or hurricanes. The roof of Corus360, a data centre in Norcross, in the US state of Georgia, is designed to survive wind speeds of 100 miles per hour or more. “It is a hardened facility,” says Steve Gruber, an executive at Res-Q, which runs Corus360 and provides backup office utilities and technology to clients, which they might call upon during an emergency or disaster.

The company’s Norcross building has 150 seats for workers. There’s an 18-inch raised internal floor with leak detection system, a backup generator and 48 hours of fuel. The walls are poured concrete and most of the structure is underground. There’s even a shower in case workers want to freshen up. According to Res-Q, the site is designed to function with a miniscule rate of failure and offers “a guaranteed uptime of 99.982百分比”.

A luxury in uncertain times

Due to the spread of Covid-19, Gruber says that staff at Res-Q facilities like the one in Georgia have had their work schedules staggered – which the company has never done before – so that operations can continue around the clock.

“We’ve had several customers already enquire as to availability,” he adds, referring to the pandemic situation. But one concern Gruber has is that some clients aren’t overly fastidious about testing their backup facilities ahead of time. 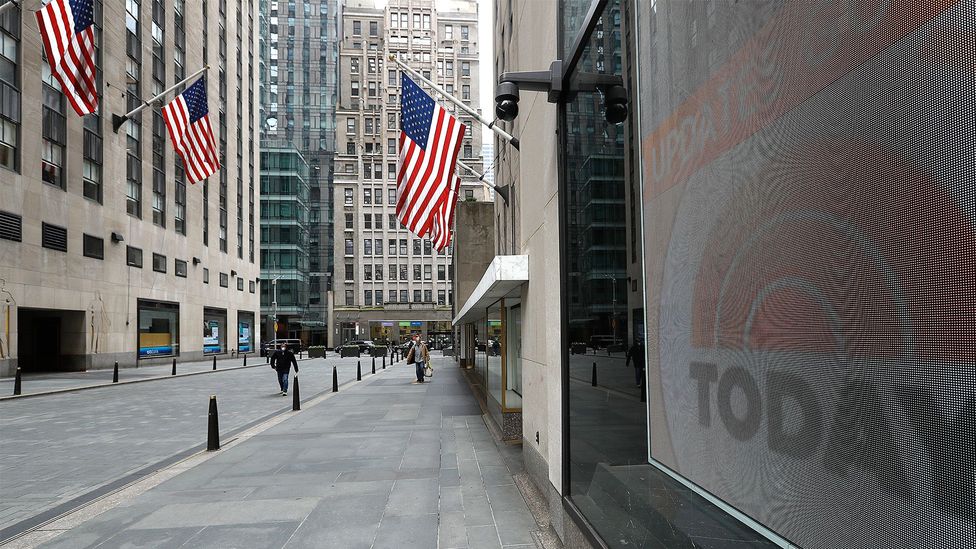 The tourism and entertainment industries have been hit hard by the restrictions in response to the outbreak of COVID-19. (Credit: Getty Images)

“We are a huge advocate of testing,” he says. “You don’t know if your solution or strategy is going to work unless you test.”

Cyber-security expert Alan Woodward at the University of Surrey agrees this is an important point: “It’s a bit like fire drills. You have to test it.”

Although some firms have spent huge sums of money to ensure they have backup offices ready and waiting, it’s important to realise that this is a luxury, says Daniel Aldrich, director of the security and resilience program at Northeastern University in Boston, Massachusetts.

“A lot of the firms that we interview here in the Boston area simply don’t have that,” he says. And he notes that companies are already being hit by falling trade as people stay at home more and focus spending on things like groceries. If there are going to be large numbers of bankruptcies, he asks, can the government do anything to help?

For now, these backup offices may offer safe havens for employees who can’t work from home. Will everyone go back to the regular office when the coronavirus pandemic is over? Perhaps, but, perhaps not. We have yet to find out how this disease will affect society in the long-run – but changes to how we work could be surprisingly permanent.