Loading
100 Year Life?|?Longevity
Can the ‘Centenarian Olympics’ help you live longer?
Share using EmailShare on TwitterShare on FacebookShare on LinkedinShare on Whatsapp 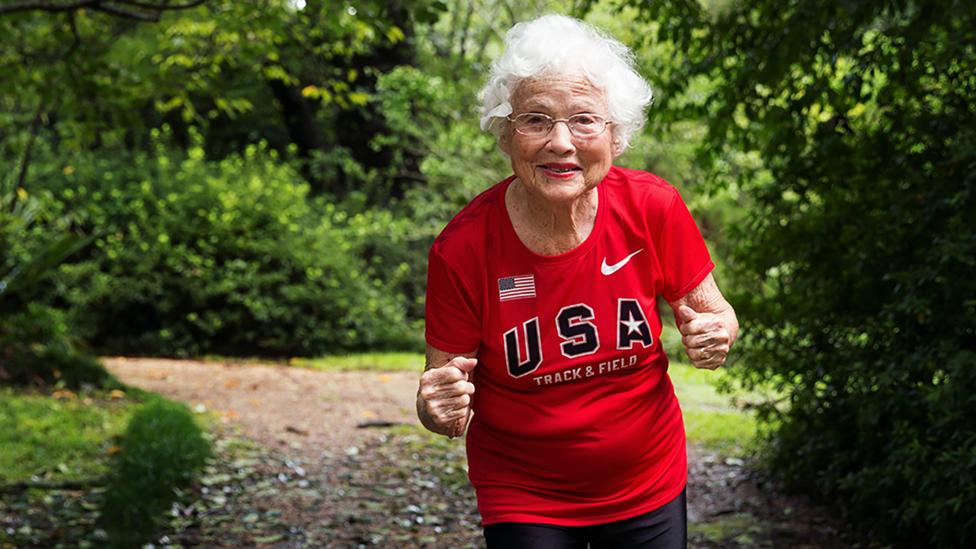 By Alexander Villegas 22nd May 2020
Living to 100 isn’t a given, but a new concept about training for your century milestone might be able to help.

Susan Wilder is training for 2062, the year of her Centenarian Olympics.

When that year comes around, Wilder, 57, still wants to be able to travel, garden, play with her great-grandchildren and move around comfortably. They’re all things she can do now – but she’s getting fit to make sure she can still do them in 43 years.

“I’ll walk two to five miles every day. I do some strength training and flexibility work,” says Wilder, who is the CEO and founder of a family medicine practice in the US state of Arizona called LifeScape. “It’s about the little things every day. Every choice I’m making I’m thinking about things that work in my favour. It’s about self-preservation.”

Ideally from birth, we should prepare to live to 100 – George Leeson

For most people, just surviving for a century is a worthy goal, but others have set themselves a few challenges for when they reach 100: staying healthy, active and able. They hope the ‘Centenarian Olympics’ can help them get there. Unlike the quest for gold in the standard Olympics, the Centenarian Olympics are different: they’re a personal competition against the body’s natural decline.

The prize? Still living your best life, even after a century.

Wilder heard about the Centenarian Olympics while listening to a podcast by her functional medicine mentor, Mark Hyman. In that podcast,The Doctor’s Farmacy, Hyman interviewed Peter Attia, a 47-year-old Canadian-American surgeon and aspiring centenarian with a medical practice focused on longevity.

Attia said he came up with the idea during the funeral of a friend’s parent. In the final years of their life they were unable to do the things they loved the most like golf and gardening due to physical injury.

“We’re sitting there at the funeral, and I don’t know, I’m just thinking there’s got to be a way to stop this,” Attia said in the podcast. “We do all this amazing training for athletes who are trying to go to the Olympics, or even being weekend warriors, or doing whatever they’re going to do. But why aren’t we training to be kick-ass 90-year-olds?” 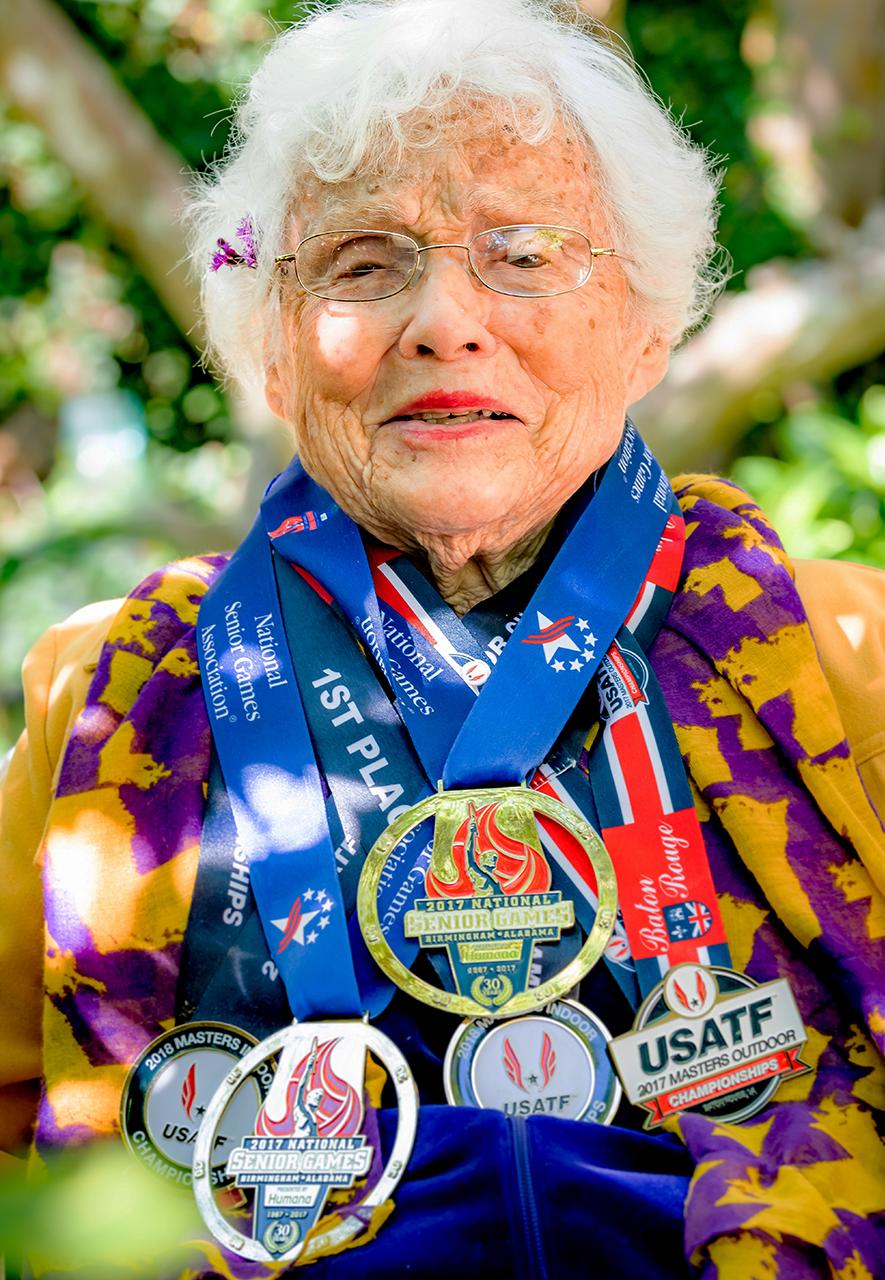 Julia 'Hurricane' Hawkins is 104, holds world records for her age group in sprinting, and has been competing in 'Olympics' for over-50s since the '80s (Credit: Margaret Matens)

Attia came up with a list of 18 things he wanted to do when he turned 100. He then chose exercises, like a 30-pound goblet squat, to mimic those activities and called them his “Centenarian Olympics.” Attia’s ‘events’ replicate everyday tasks like carrying groceries up flights of stairs, putting a suitcase in an overhead bin and getting off the floor with a single point of support – all things that Attia believes will help him prepare to live the life he wants to at 100. Even though the events comprise ability a young athlete might for granted, they’re challenges for a century-old body.

Of course, not everyone lives for a century.

“Despite all the preparation and trying to prevent diseases, there’s no guarantee to reach 100,” says George Leeson, the director of the Oxford Institute of Population Ageing. But, he adds, strength is key to staying physically independent later in life. “The research would suggest that even minor improvements in muscular strength will let us maintain independence and strength and push back frailty and instability in a person.”

As we age, our bodies start to lose muscle mass and bone density. Research shows that people can lose up to 5百分比 of their muscle mass every decade after the age of 30. Lost muscle mass can be regained through training, and Leeson says studies have shown men tend to retain more muscle mass than women. The solution is to stay active, build muscle as early as possible and focus on maintaining it.

“Ideally from birth, we should prepare to live to 100,” says Leeson. “Of course, the earlier one starts to maintain muscle mass, the stronger one will be later in life and the easier it will be to maintain. But it’s never too late to start.”

Still, even though the body changes are gradual, there are harsh moments when people realise they can’t do things they easily did when they were younger. For Wilder, this moment came on when she was doing one of things she loves most, travelling. “I was having a hard time lifting a suitcase into an overhead rack, and realised that’s a disability. The inability to do something I used to do,” says Wilder. “Disability sneaks up on people.”

Wilder started working with a trainer and is now able to put her suitcase – and everybody else’s – in the overhead bin again. At LifeScape, Wilder also works with her patients to help them achieve their life goals and even work on their own Centenarian Olympics. Wilder’s team of physicians, nutritionists and fitness experts run a gamut of tests on patients and build a custom diet, exercise and health regimen to fit their goals. Wilder says some patients are even hoping to make it to 120.

“Here, the mindset is to focus on self-preservation and optimisation. How to be able to go to Disneyland with your grandkids and great-grandkids without being in a wheelchair,” says Wilder. “I’ve been following [Dr Hyman] for 18 years and he often says my goal is to die young at a very old age. I say the same thing.” 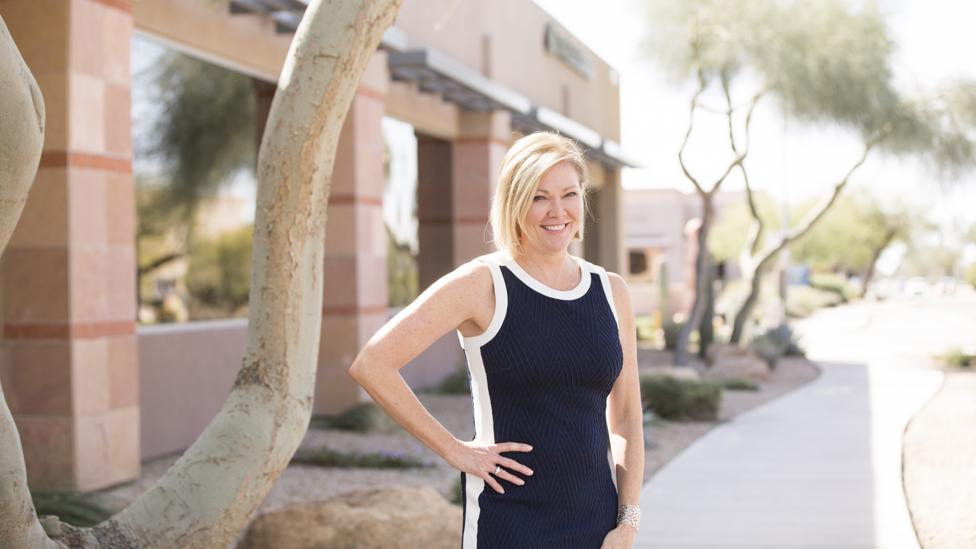 Herself training for a 'Centenarian Olympics', Susan Wilder runs a family practice that helps others do the same. Some patients want to live to 120 (Credit: Lifescape Premier)

Julia “Hurricane” Hawkins, a chatty 104-year-old with curly white hair, is often seen walking up and down the street outside her home in Baton Rouge in the US state of Louisiana. Most of her training is done at a slow pace, but Hawkins is a sprinter who loves the feeling of going fast. Hawkins’ need for speed led to two world records in her age group. She broke the world record for the 100-metre dash at 101 and broke the 60-metre dash record at 102.

Although Hawkins turned 100 before the concept of Centenarian Olympics was born, she’s been competing in the Seniors Olympics, an event for athletes over the age of 50 in the United States, since the 1980s. Hawkins picked up running later in life – much later. Hawkins was a cyclist for most of her life and picked up running after she turned 100 and couldn’t handle her bicycle as well as she used to.

Hawkins thinks cycling and constant physical activity helped her reach 100 in such good shape. “I think it’s because I’ve been really active all my life,” says Hawkins. “Part of it is being lucky, but I take care of myself, I eat right, sleep right and keep going.… You have to keep doing what you’re doing as long as you can do it.”

Although she wasn’t explicitly training for a Centenarian Olympics, her decades of activity built the foundation for centenarian independence that Attia, Wilder and others are hoping to reach. Hawkins says she bought her first good bike to celebrate her wedding in 1942. She had to get married over the phone because her husband was deployed during World War Two. Because of a rubber shortage caused by the war, Hawkins was only allowed to buy a bicycle if it was for work. So, Hawkins, a schoolteacher at the time, started commuting 11 kilometres to and from her school every day. She even threw a small party when her bicycle’s odometer reached 20,000 miles.

Hawkins’s training has paid off: she’s often the only athlete in her age group. But, if the idea of the Centenarian Olympics catches on, the centenarian category might get more crowded in the following years. Leeson says the world is ageing, and statistics in the United Kingdom suggest that anywhere from a third to half the current population will reach 100 as we go further into the 21st Century.

Training for our later years may help us face our fears of growing old head-on. The Oxford Institute of Population Ageing conducted a survey across 21 different countries, and showed that peoples’ biggest fear about ageing was becoming totally dependent on others and not being able to get the help they need.

“It’s difficult for many people to not immediately associate those extra years with disability and dependency,” says Leeson. “We live in a society where views of older people and old age still does tend to be overwhelmingly negative.” But Leeson says the opposite is true for people who actually reach 100. “One thing they do have is a very positive outlook,” says Leeson. “The expectation is more fearful than the reality.”

Hawkins agrees. But her advice for people looking to reach the 100 milestone isn’t only to stay physically active. It’s also to be positive, have passions and appreciate the “magic moments” in life.

“I have ‘magic moments’ books where I write down things that are unusual or wonderful,” Hawkins says. “It’s amazing how many things you come across if you look for them. Sunrises, hummingbirds, shooting stars, a spiderweb with morning dew growing on a bonsai.... You can look for bad things if you want, but there are so many good things if you just look.”

Share using EmailShare on TwitterShare on FacebookShare on LinkedinShare on Whatsapp