Loading
Covid-19
Will coronavirus change Germans’ love of cash?
Share using EmailShare on TwitterShare on FacebookShare on LinkedinShare on Whatsapp 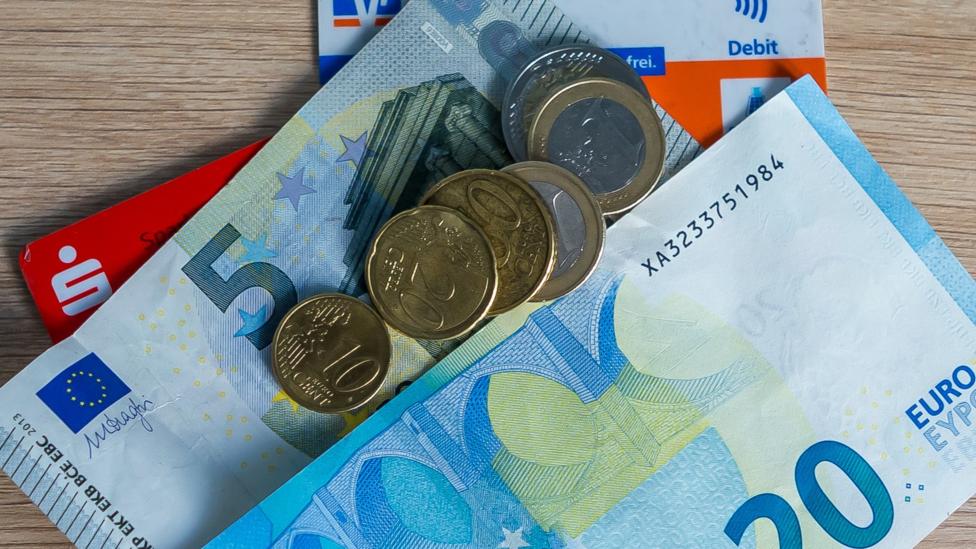 By Krystin Arneson 21st May 2020
‘Cash is king’ has long been the motto of German consumers and small business owners – but Covid-19 is bringing rapid change.
G

Germany might be known for its proud culture of technological innovation, but it's not uncommon for newcomers and tourists to be caught out at cafes and small businesses that only take cash.

Although online and mobile payment systems such as Apple Pay have made inroads in recent years, for many German businesses owners – and consumers, too – cash is king. This is especially true at smaller establishments, like the corner shop and neighbourhood restaurant. It’s a habit rooted in a thrifty culture with a preference for tangible spending.

Yet since the onset of the coronavirus pandemic, cash payments have, for the first time, been actively discouraged in Germany. “Covid-19 has probably changed German payment behaviour faster than any single technology ever has,” says Georg Hauer, general manager of the Germany-Austria-Switzerland region at N26, a Berlin-based online banking start-up.?

For many Germans, using cash isn't just a personal preference; it's a cultural value that they've grown up with — and one tied closely to a national value with centuries-old roots.

Cash as a national value

The longstanding preference for cash “is based on an underlying preference for the supposedly concrete versus the abstract”, says Dortmund-based historian Robert Muschalla, who curated 2018’s Saving – History of a German Virtue exhibition at Berlin’s German History Museum. Muschalla says this ideology emerged in the late 18th Century, when Germans were socialised to prioritise a tangible result from their labour over more abstract forms of exchange, such as IOUs, as the economy evolved.

A century later, with worker-employer clashes increasingly common, Muschalla says encouraging saving was seen as a way to reduce factory tensions. “The motto was: ‘Those who work hard and save and have something to lose do not make a revolution’,” he says. Thrifty values persisted through periods of economic turbulence after both World Wars. After World War Two, he adds, savings banks opposed the introduction of consumer credit, fearing it would damage saving culture.

By the time bank cards were introduced for much of Europe and the US, Germans were still just fine dealing with cash. This belief has stuck around: ‘card payment’ in Germany still largely means debit card – and German-style ‘credit cards’ largely don't accrue long-term debt but deduct the balance in full from a user's bank account the next month. 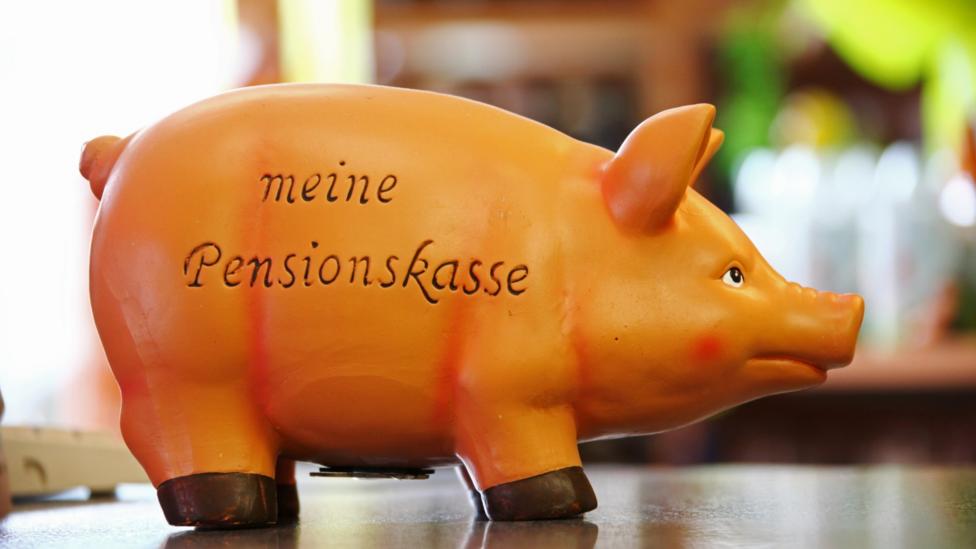 Growing up in Bavaria in the 1980s and ‘90s, Anna Steigemann, an assistant professor in urban studies at the Technical University of Berlin, remembers going with her family to take cash out of the bank once a week. Her father would withdraw it on Thursdays, they’d go grocery shopping on Fridays and to the market on Saturday, and the remainder saw the family through the week.?

Maik Klotz, 44, co-founder of Payment & Banking, which reports on fintech innovation, says his parents taught him as a child to value cash. Debit-style card payments, if available, weren't popular when he was growing up. “Back then, the fear of losing track of things and the fear of abuse was high," he says, adding that his parents still remain sceptical of card payments.?

In recent years, the German payment landscape has evolved. In 2017, an ongoing Bundesbank study tracking consumer payments noted a slow but steady shift in habits, but showed that 88百分比 of Germans wanted to continue using cash in the future. The same study found that Germans carried an average of 107 ($116, ?95) in their wallets; the year before, a European Banking Commission report found Germans led their Eurozone neighbours in carrying cash.

In Germany, restaurant visits and groceries are paid in cash more than twice as often as the European average - Holger Sachse

It was in 2018 that card payments made in stores overtook cash payments in value for the first time, the Cologne-based EHI Retail Institute reported, by fractions of a percentage (48.6百分比 for card, 48.3百分比 for cash). Yet cash was used in 76百分比 of all retail transactions, still dominating smaller purchases. “In Germany, restaurant visits and groceries are paid in cash more than twice as often as the European average," Boston Consulting Group expert Holger Sachse told The Local in 2018.?

Young Germans, in particular, are looking for new payment alternatives, the Bundesbank’s 2017 study showed. Yet there are concerns that transitioning to a cashless culture would alienate both the older generation and lower-income people who might be unbanked. Many point to lingering concerns over privacy, especially among older consumers.?

"Many older Germans still remember a previous era of state surveillance all too well. This is why many Germans continue to guard their personal data and privacy fiercely, and have been less trusting than many of their other European counterparts when it comes to adopting new tech solutions," says Hauer. 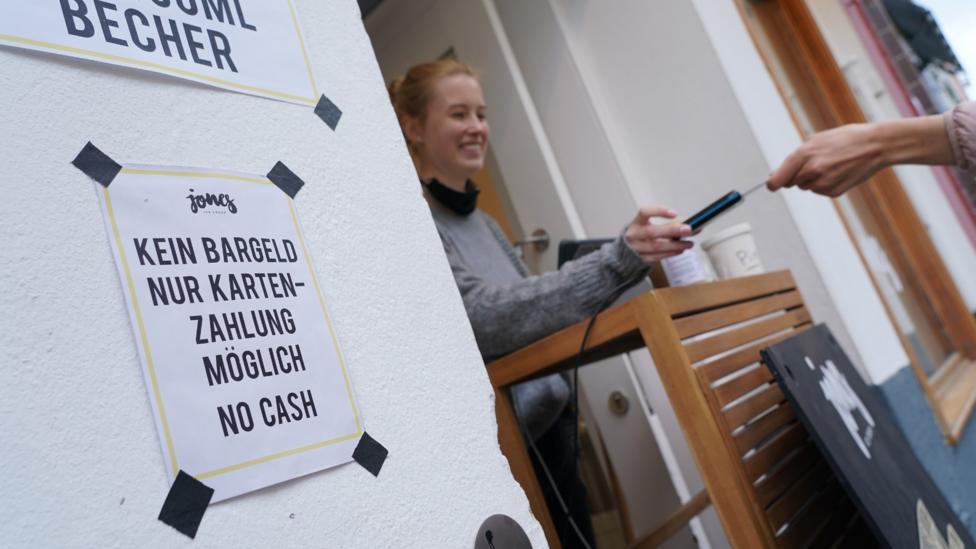 For the first time, some shops and businesses are actively discouraging cash payments

But older consumers aren’t the only hold-outs. Small businesses still prefer the simplicity of cash – even millennial owners. Sami Gottschalk, 28, owns MINE Salon in Berlin’s arty, alternative Kreuzberg neighbourhood. The hair salon has always been card-free because he finds it easier to avoid the constant juggle between what’s in the cash drawer and what’s gone through on cards. “This is how I’ve worked before in a previous hair salon, and I thought it was easier for me to keep going with this method,” he says.?

At the salon, which is popular with both Berliners and expats, he's noticed that German clientele tend to carry more cash than Americans or Brits. Cashless customers are asked to withdraw money from a nearby ATM, something Gottschalk says people generally don't mind, though it can catch his foreign clients by surprise.?

With Covid-19, a cultural shift to cards??

Yet since Covid-19 began spreading around the world, Germany’s on-the-ground reliance on cash has been upended. In a few short weeks, cash went in many places from being expected to stigmatised or banned altogether. Of course, Germany's not the only country where cash reliance has dropped as a result of the pandemic: One survey in the UK, where 50百分比 of people are already estimated to be cashless, suggested that 75百分比 of people were using less cash due to the outbreak. However, the shift is especially noticeable in cash-loving Germany.?

“[Covid-19] was the first time Germany’s biggest retailers all began actively promoting the use of contactless payments,” says N26's Hauer. “From grocery stores to petrol stations, and in-store signs to even purchased radio spots, big retailers encouraged Germans to change their behaviour.” Smaller retailers who only used to accept cash have pivoted, too: "Not only have most of them started accepting card payments, quite a handful of them are actually only accepting card payments now, especially here in Berlin.” 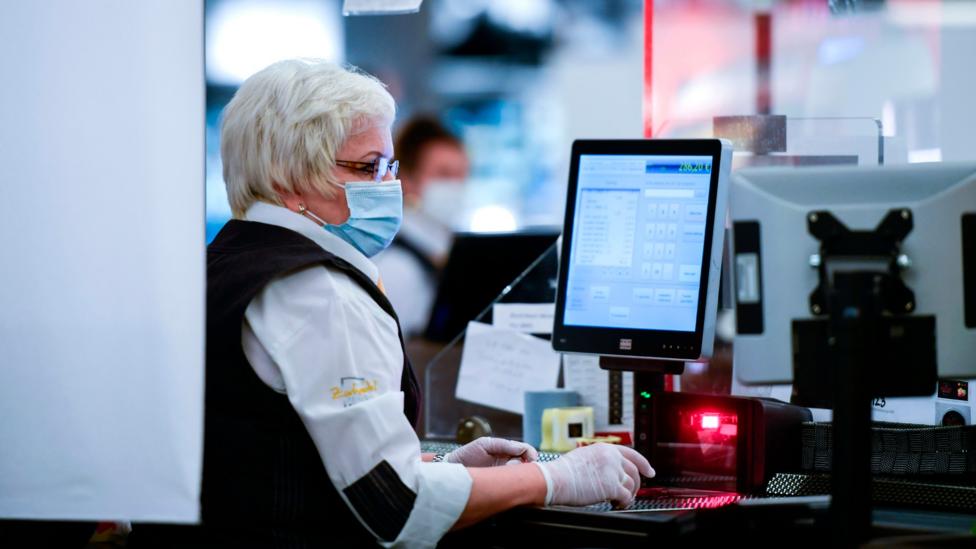 Before Covid-19, Germans used cash to pay for groceries more often than other European counterparts

A Bundesbank survey has already shown Covid-19-driven changes in Germany’s consumer behaviour, aided by a change in late March that doubled the limit for contactless transactions at the till to 50. (The UK, similarly, raised the limit from ?30 to ?45 from April to drive card payments.). By late April, 43百分比 of respondents said they had changed their payment behaviour, compared to 25百分比 at the start of the month. Sixty-eight percent of those who changed their behaviour said they were now more likely to pay with a card.?

Another recent survey, taken by the German Payment System Initiative, revealed that 57百分比 of Germans use debit and credit cards now more than they did before the pandemic, and almost half have “significantly reduced” their cash use. At N26, Hauer says the bank recorded 56百分比 fewer withdrawals from ATMs in the first month of Germany’s lockdown compared to the previous month.

Since I’m always paying with debit, I have no idea how much money I’m actually spending right now - Anna Steigemann

For Anna Steigemann, the transition has been tough. “Now I’m in a situation where I go to [natural supermarket] Bio Company and buy a single pretzel or roll and pay [for] even that with a debit card because they ask for it,” she says. “Since I’m always paying with debit, I have no idea how much money I’m actually spending right now…. It’s a very unstable and insecure time now anyway and losing control over my account right now makes me even more insecure.”?

Following historical precedent, Germans appear to be responding to the current crisis by spending more carefully – and saving. Hauer says an internal bank survey found that 55百分比 of Germans (taken from a sample of 10,000 people across the bank’s main markets) had “already changed their financial priorities for 2020”. About two-thirds of respondents said they were putting aside more money than before the crisis.?

Thomas Giese and Marion Coulondre opened Bichou Cafe, a French comfort food outpost in Berlin’s gentrifying, eclectic southern district of Neuk?lln, in 2016. "When we opened, very few businesses in Neuk?lln were offering card payment,” Coulondre says. "People were totally used to paying cash, and as we were a small neighbourhood café, this was not an issue at all to not accept cards. It was just more simple for us and cheaper to start off like this.”?

They started taking cards at the beginning of 2019. And, while they continue to accept cash, have seen more customers than ever pay by card during the pandemic – even regulars who always use cash. Yet, income is down. “At the moment we have as many card payments as on a regular day but sometimes half the revenue,” Coulondre says. Looking to the future, she anticipates an increase in card payments as the trend she's seen over the last two years continues.?

Post-Covid: back to cash??

It’s hard to imagine cash regaining its former throne in German consumer life. In Hauer’s view, Covid-19 provided a nudge that society was ready for. “All this together helped drive a change in behaviour: the speed and magnitude of the change tells us that it wasn’t difficult to make, but people needed a strong reason to break an old habit.”?

He says N26 believes that Covid-19 will “accelerate” the way to a future in which “cash payments are the exception rather than the norm”. Ingo Limburg, head of the German Payment System Initiative, told DW on 7 May he expects greater card use to continue: "We assume that the trend toward card payments will increase disproportionately.”?

At MINE, Gottschalk is sticking with cash for the moment – with hand sanitiser ready at the cash register – but he's open to change. “I don’t think people will actually go back to cash as often as they were,” he says. "It's true now that [card payment is] starting more and more, and it’s definitely something we might have to consider in the future. I don’t think we can keep on going using cash only.”

Share using EmailShare on TwitterShare on FacebookShare on LinkedinShare on Whatsapp